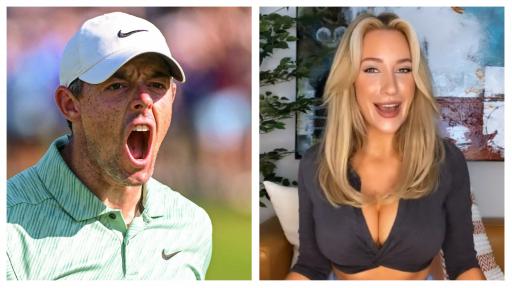 Paige Spiranac says she would like to bin the Presidents Cup and replace it with a LIV Golf vs PGA Tour team event.

Spiranac, who has amassed 3.6 million followers on Instagram, took to her social media channels to reveal her favourite moments of the PGA Tour season after seeing Rory McIlroy cap off a fine year with a record third FedEx Cup title on Sunday night.

The social media sensation praised McIlroy for backing up his golf on the course on top of acting as the primary PGA Tour advocate against LIV Golf off it.

McIlroy last night spoke of how he hates the fact he will have to come up against 18 LIV Golf players at the BMW PGA at Wentworth next week.

But the biggest highlight of her year has been seeing the emergence of Greg Norman's LIV Golf Tour go toe-to-toe with Jay Monahan's PGA Tour.

So much so, Spiranac now wants to see an end to the Presidents Cup between United States and the Internationals, and for the biennial contest to be replaced with a LIV Golf vs PGA Tour team event.

"Let's get rid of the Presidents Cup, let's do LIV vs PGA Tour," said Spiranac.

"Can you imagine how electric that would be?""

We recently predicted what the score would be between the teams, but that was prior to Cameron Smith joining LIV Golf.

The 2022 Presidents Cup will take place at Quail Hollow Club in Charlotte from September 22 to 25.

Looking at the teams on paper right now for this year's renewal, and it would appear the USA will make it 12 wins with a minimum of fuss.

The Internationals team is likely going to look a little depleted in terms of star quality as many of their best players such as Cameron Smith and Abraham Ancer will be ineligible to compete as a result of them having joined LIV Golf.

The Presidents Cup is a PGA Tour-backed contest, and the PGA Tour has suspended all members from competing in their tournaments as a direct result of having played in a LIV Golf tournament.

International captain Trevor Immelman last week described all the LIV Golf transfer talk as being a "giant pain in my ass".