Paige Spiranac hits out at the LIV Golf players who suddenly want to play more golf after saying they wanted to play less golf. 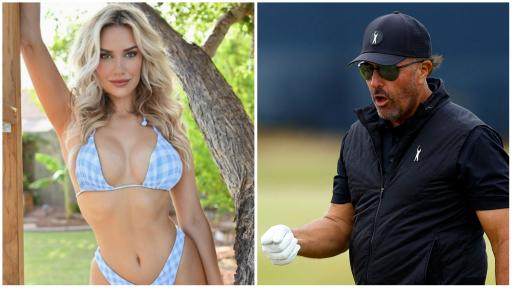 Paige Spiranac has slammed the LIV Golf players who filed an antitrust lawsuit against the PGA Tour.

Phil Mickelson, Bryson DeChambeau and Ian Poulter were three of the 11 players to have filed a lawsuit against the PGA Tour.

The biggest bombshell from the court documents, which are 105 pages long, is that Mickelson was suspended by the PGA Tour back on March 22.

This was well before suspensions were dished out by the PGA Tour when LIV Golf players first teed it up in the inaugural LIV Golf Invitational London at Centurion Club in June.

PGA Tour commissioner Jay Monahan has since issued a statement to PGA Tour members following the antitrust lawsuit from the LIV Golf players, which you can read in full here.

Memo from PGA Tour commissioner to players in response to antitrust lawsuit that was filed Wednesday in California. pic.twitter.com/T0UR9FMoud

Social media sensation Spiranac, who has more Instagram followers than Tiger Woods, did not take kindly to hearing a number of LIV Golf players are now demanding more golf when they had made it clear recently that they rather fancied playing less golf on the LIV Golf Invitational Series.