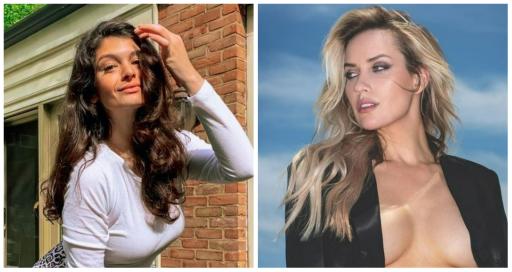 The pair discussed the most recent LIV Golf tournament that took place in Portland, Oregon at Pumpkin Ridge Golf Club.

South Africa's Branden Grace took home the win there and a $4million check after his two-stroke victory over new signee Carlos Ortiz.

And it's fair to say that Rose is absolutely not a fan of LIV. She absolutely tore into the Saudi-backed series in this episode.

Asked whether she had watched the broadcast, Rose said: "Unfortunately, yeah, I watched the three days' [coverage] on Twitch.

"And it was so painful. The golf is so bad. The commentators have their heads so far up Greg Norman's a**.

"It's just painful. It's uncomfortable. They're calling Pat Reed a fan favourite. And it's like, dude... pull your head out of everyone's f***ing a**.

"It's just so over the top. The golf is terrible, right? They play s*** golf. Pumpkin Ridge is a dog track, I'm sorry, if you looked at the skirts around the greens it was patchy and gross.

"The fact that there were so many guys over par at a course that, as I said, is kind of a dog track is ridiculous.

"He's a nice dude. He just won a World Golf Championship last year, he's exempt for however many years on the PGA Tour and he goes to LIV.

"You [Ancer] have your own company! You don't need money. You are doing just fine."

She added: "And nobody was talking about Paul Casey because he's injured and nobody really gives a s***, then all of a sudden he pops up on the broadcast.

"And he's like, 'Yeah, I'm the next signee' and I'm like, what?! You're injured. What are they going to do like cut a finger off every time Paul Casey shows up and just doesn't tee off at a tournament.

"He literally did that like six times this past season on the PGA Tour. I don't know. It's bad golf. It's bad commentary. It's all round bad.

"The shotgun start was painful. There's no rhythm to the broadcast. It's just not good."

Next page: Paige Spiranac on why she'd turn down "any offer" from LIV Golf