Spiranac mocks DeChambeau's driving performance at The Masters, and it reduces Brooks Koepka to tears of laughter... 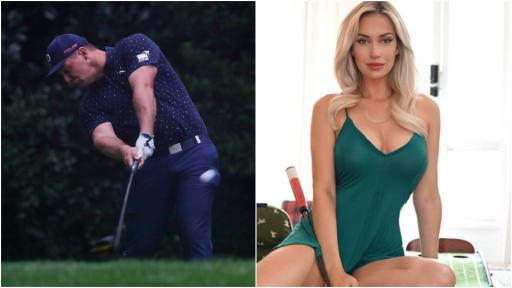 Paige Spiranac tipped Bryson DeChambeau to win The Masters at the start of the week, and then ended up mocking him on Twitter at the end of it.

Spiranac, who has the largest following of any lady golfer in the world across all her social media platforms, believed DeChambeau would have the biggest advantage of any player in golf's final major due to ranking first in the PGA Tour's driving distance charts.

But as things panned out at Augusta National, DeChambeau's all-out attack mode backfired somewhat after narrowly making the halfway cut on the level-par number.

A third-round 69 moved DeChambeau up to 3-under par after 54 holes, but 13 strokes off the pace heading into the final round.

"Lesson learned from Bryson this week guys," tweeted Spiranac." It’s not how long your shaft is but how you use it."

Lesson learned from Bryson this week guys. It’s not how long your shaft is but how you use it https://t.co/cviAXs9ZmC

It was a tweet that even reduced Brooks Koepka to laughter tears.

Spiranac further mocked DeChambeau on Friday when tweeting: “DeChambeau is in deshambleas."

Koepka, who was Spiranac's other pick for the title, finished tied seventh on 10-under par.