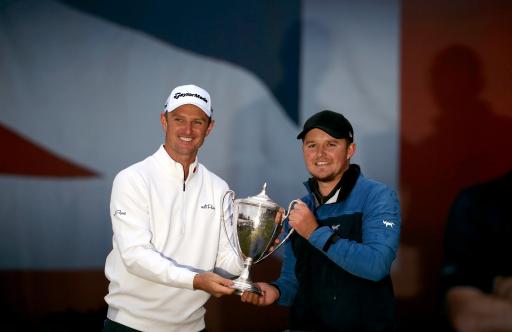 Eddie Pepperell defied miserable conditions with a little help from his mum to win his second European Tour title of the season in the British Masters – and with it a different Masters appearance next April.

Pepperell carded a closing 72 at a wet and windy Walton Heath to complete a wire-to-wire victory on nine under par, two shots ahead of playing partner Alexander Bjork from Sweden.

Pepperell’s three-shot overnight lead was down to a single stroke when he three-putted the ninth – the same hole where he enjoyed a spectacular hole-in-one on Thursday – and Bjork covered the front nine in 34.

However, Pepperell then promptly holed his second shot to the 10th from 122 yards for an eagle to move three clear and, although bogeys on the 15th and 16th set up a nervous finish, the 27-year-old from Oxfordshire saved par from a bunker on the last to seal a deserved win.

“The credit for the eagle goes to my mum Marian because she gave me some mittens as I was walking off the 10th tee,” Pepperell joked. “It was such a tough day in the conditions, I didn’t swing it well from the get-go and it was an absolute grind.

“I did not sleep great the last two nights. My mind was very active, especially with all the stuff after the hole-in-one, the social media.

“It was hard to keep my mind on the golf because I was leading all week, I didn’t do much practice and I played terrible leading up to the event; Wednesday was the worst I’ve played for ages.

“I didn’t know how I felt about my game, I had to grind it out at times and I guess to have won like that is really satisfying. I said on Saturday I was not sure how I felt being in the lead in this tournament compared to any other but now I’ve won it does feel very special. It’s brilliant.”

The win will take Pepperell into the world’s top 35 and almost certainly secure a Masters debut in 2019, with the top 50 at the end of December qualifying for the first major of the year at Augusta National in April.

Pepperell was ranked outside the top 500 as recently as May last year, but won the Qatar Masters in February and followed a runners-up finish in the Scottish Open with a tie for sixth in the Open seven days later, carding a closing 67 at Carnoustie despite being hungover.

“It’s always been a dream to play in the Masters and it’s been my caddie Mick’s goal to get me into the top 50,” Pepperell added. “It also shows I’m not a one-hit wonder and I’m actually really pleased for my mum and dad to see it because they weren’t in Qatar. For them to be here is pretty awesome.

“I’m interested to see how different Augusta is to what it appears on TV and there’s going to be some nice events for me to look forward to next year. It’s going to be a great opportunity for me to go to America and play a few more majors and WGCs (World Golf Championship events) obviously.

“I haven’t got my head around that, but I intend to.”

Fleetwood’s tie for ninth saw him close the gap slightly to Ryder Cup partner Francesco Molinari at the top of the Race to Dubai, although Open champion Molinari – who was tied 56th – still enjoys a lead of more than 1.3million points with five events remaining.