Rose backs Harrington to be Europe’s next Ryder Cup captain 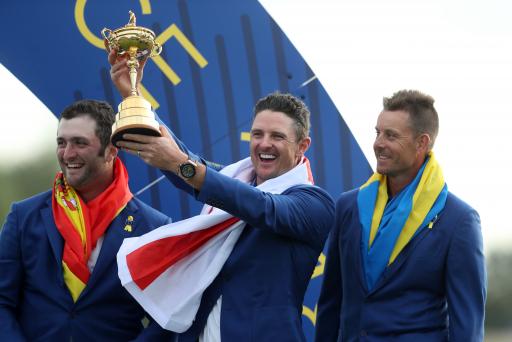 Justin Rose has backed Padraig Harrington to be Europe’s next Ryder Cup captain.

World number two Rose was part of the European team led by Thomas Bjorn which beat the United States in Paris at the end of last month.

Talk has already turned to who will take charge when Europe defend their crown at Whistling Straits, Wisconsin in 2020.

Rose believes Irishman Harrington is an ideal candidate and also feels Lee Westwood is in contention.

“I would say Padraig for me would be the front-runner. If he doesn’t do it this time then I’m not sure…you’ve got to start fitting guys in,” Rose said on Sky Sports News.

“(Lee) Westwood’s still capable of making a team next time around I believe, so is Padraig.

“Padraig’s been on the leaderboard a bunch this year so I would say three-time major champion, clearly a European legend, for me Padraig is the front-runner and then you’ve got Westwood.

“It’s interesting when you try to project out who the possible captains are for the next 10 Ryder Cups. It gets pretty interesting.”

Rose, who had a brief spell as world number one last month, is hosting the British Masters at Walton Heath this week.

The 2013 US Open champion and Olympic gold medallist still has plenty of personal ambition and dreams of securing a career grand slam by winning the Masters, Open Championship and PGA Championship.

“I would say I’ve accomplished a lot of my dreams, for sure,” he said.

“This season has given me a couple more strings to my bow, to be able to say I’ve got to world number one is a nice tag line and it’s a nice milestone to say you’ve achieved in your career and in your sport.

“A career grand slam would be the icing on the cake but there’s a lot of hard work there. I still love the game, I’m not complacent.”