Do you agree with Jon Rahm? 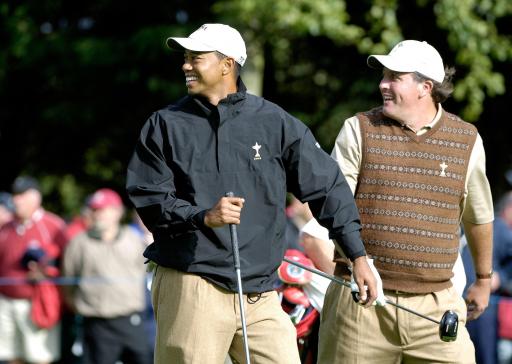 Jon Rahm will be watching the multi-million dollar showdown between Tiger Woods and Phil Mickelson, either in person or on TV, despite admitting the contest has come at least 10 years too late.

Woods and Mickelson will go head-to-head at Shadow Creek in Las Vegas on Friday, with nine million dollars (£7million) going to the winner and the proceeds from lucrative side bets, including one of £155,000 on the first hole, reportedly going to charity.

The event is not open to the public but will be available to purchase on pay-per-view, with both players wearing microphones so that viewers can listen to their interaction and further side bets.

Interest from fellow players has been mixed, with Justin Thomas saying there was “zero-per cent chance” he would be watching, while Rory McIlroy said: “Fifteen years ago it would have been great, but I think nowadays, it missed the mark a little bit.”

Sixteen years ago Woods and Mickelson were ranked first and second in the world, but are currently 13th and 27th respectively, have a combined age of 90 and were last seen together scoring no points from six matches at the Ryder Cup.

However, Rahm told Press Association Sport: “I’ll be watching. I’m close to Vegas, it’s a four-and-a-half-hour drive, so I’m still deciding if I’m going to go see it in person or not, because I might make a joke with Phil and just tell him I don’t want to pay the pay-per-view.

RELATED: HOW TO WATCH TIGER WOODS VS PHIL MICKELSON

“But I’ll be interested in watching and see how it is. I don’t know how it will be and maybe in the future I find myself in one of those, so hopefully it’s a success.

“(But) I feel like this match is 10 years too late. Maybe when they were both in their prime it would have been extremely amazing. I’m still not clear on the format and they need to clarify it.

“I’d be surprised if the match finishes before the 17th hole. If somebody has a really bad day they’re not going to finish on the 13th, two hours too early.

“The funny thing is that Phil can trash talk to anybody and back it up with his career accomplishments.

“The only thing he has on Tiger is that he won on the PGA Tour as an amateur (1991 Tucson Open), but I think 14 majors and 80 PGA Tour events are a lot more valuable than that.

“I think Tiger’s always going to have the upper hand on that and – knowing Phil – it will bother him that he’s not the man in power.”

Critics of the clash were given further ammunition on Thursday when the players posed with their arms around a massive pile of money, with British Masters winner Eddie Pepperell labelling it a “putrid attempt at attention” and “pathetic”.

Whether the contest gets the attention it seeks remains to be seen, but – while the on-course result will not matter – the effect it has on the future of golf broadcasting and gambling could be profound.

Commissioner Jay Monahan admitted in April that “there are commercial opportunities” for the PGA Tour in the expansion of legalised sports betting in the United States, while Mickelson told a pre-event press conference: “The ability to have fantasy golf and live real-time wagering only benefits interest in the game of golf.”

So, while there can only be one winner between Woods and Mickelson in Sin City, it could be the bookmakers who are the ones celebrating on Friday night.