Spiranac fires shots at DeChambeau after he slams his Cobra driver at The Open... 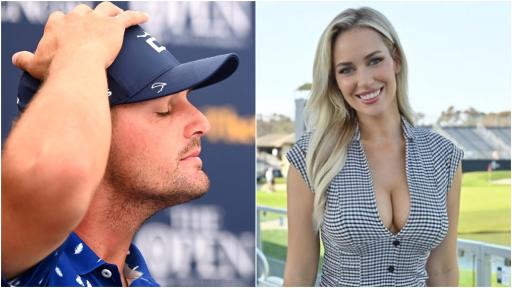 Paige Spiranac has hit out at Bryson DeChambeau over the shocking comments he made about his Cobra Radspeed driver on day one at The Open.

Spiranac, the social media sensation with more than 3 million followers on Instagram, tweeted her disapproval at DeChambeau's damning words about a driver he gets a paid "a lot of money" to use on Tour.

"Just saying it’s not great if you’re paying someone a lot of money and they say your driver sucks just because they can’t find the sweet spot," tweeted Spiranac.

Bryson is becoming less and less popular by the day, at this rate he 'll be less respected than Patrick Reed by the Ryder Cup and no American will want to play with him

They should pull his sponsorship immediately because of the ungrateful attitude! Ricky has struggled lately, has he blamed his clubs?? Not once!#dropthatcrybabynow!

The fact it was the guy who caddied for him at the Rocket Mortgage makes it even better. Not just a random Cobra rep.

Perhaps there is another reason Bryson can't hit a fairway...I wonder...

Cobra Tour rep Ben Schomin, who acted as DeChambeau's stand-in caddie at the Rocket Mortgage Classic two weeks ago, fired back at DeChambeau's comments in an interview with Golfweek earlier this afternoon.

"Everybody is bending over backwards," Schomin told Golfweek.

"He has never really been happy, ever. Like, it’s very rare where he’s happy," continued Schomin, who acted as DeChambeau's stand-in caddie on the PGA Tour two weeks ago after DeChambeau decided to part ways with long-time caddie Tim Tucker.

"Now he’s in a place where he’s swinging a 5-degree driver with 200 mph of ball speed. Everybody is looking for a magic bullet. Well, the magic bullet becomes harder and harder to find the faster you swing and the lower your loft gets."

DeChambeau is using a custom Cobra Radspeed driver that has 5 degrees of loft and is 46 inches in length.