Social media influencer and golfer Paige Spiranac believes that Bryson DeChambeau "said something" which wound up Brooks Koepka during a now-infamous interview at the PGA Championship. 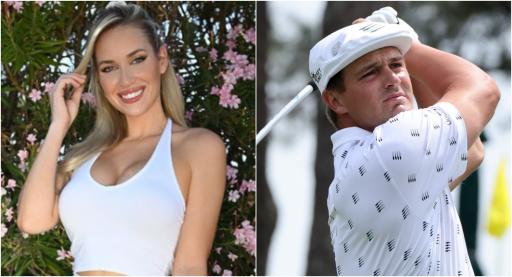 Paige Spiranac doesn't believe that Bryson DeChambeau is "innocent" in his involvement in the infamous clip of Brooks Koepka from the PGA Championship.

Koepka was being interviewed at Kiawah Island when suddenly DeChambeau walked behind him, appearing to say something but it is unclear as to what was said.

Whatever was said, it agitated Koepka and he lost his train of thought and had to start the interview again, using expletive language in his frustration.

Spiranac, who was talking on the Playing A Round podcast with Teddy Greenstein, believes that DeChambeau could have deliberately agitated Koepka.

"How much hate and disdain does Brooks have for Bryson?" said Spiranac.

"People were going back and forth on what Bryson said to Brooks, some people were saying, who were actually there, that Bryson made a snotty comment towards Brooks.

RELATED: "I LOVE WHAT'S BEEN GOING ON": BRYSON DECHAMBEAU ON FEUD WITH BROOKS KOEPKA

"I think Bryson said something, I don't think he's as innocent in all of this as he makes himself to be."

Related Articles
Tiger Woods reveals funniest thing a fan has ever said to him on a golf course
Jack Nicklaus on former business partner: "He acted as if I was his property"

The feud between the American pair has gripped the golfing world and it has provided much entertainment for fans, players and experts alike.

Spiranac has over three million followers on Instagram and she has grown extremely popular in recent years. She and Greenstein also discussed the public opinion element of the spat, which she believes to be split down the middle.

"I am for the side of drama, I don't think I am taking Brooks or Bryson's side on this. I like the fact that both of them are getting in the mud," added Spiranac.

"This is the first time that Bryson is giving it back to Brooks, which I actually do love to see. I think that people can think Brooks is a bit of a bully, but it's very much equal on this now.

"When I put up a poll on do you like Brooks better or Bryson better, it was pretty much evenly split which I was pretty surprised with. I always thought people were more team Brooks, but it seems a lot of people now are team Bryson."