Paige Spiranac on apparent BEEF with Phil Mickelson after being blocked

Paige Spiranac revealed back in August that Phil Mickelson had blocked her on Twitter. 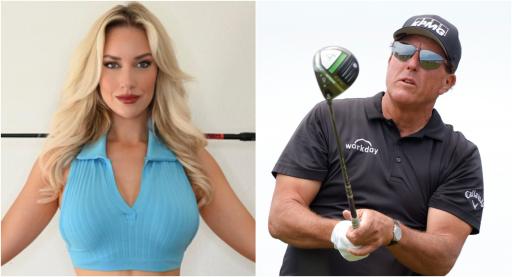 Paige Spiranac revealed back in August that six-time major champion Phil Mickelson had blocked her on Twitter and she still doesn't know why.

Spiranac noticed a tweet by SKRAM Marketing CEO Samantha Marks that included a video of Mickelson, but normally, she wouldn't be able to see it.

She said in the comments that she wishes Lefty would unblock her as she is missing out on a lot of funny content on his Twitter feed.

The pro golfer is still none the wiser as she recently posted a video of herself playing a hole at Silverado in Scottsdale, Arizona.

Spiranac made a birdie on the par-5 1st hole, but she interestingly said that she would rather make a bogey on the first hole because she has had some of her best rounds starting in this fashion.

In the comments, one golf fan questioned whether Spiranac and Mickelson have beef and she confirmed that the situation has unfortunately not changed.

The golf fan then comically suggested that the next edition of The Match could be between the pair, but I wouldn't hold your breath on that.

Spiranac has previously revealed that figures from the LPGA Tour have distanced themselves from her, due to the nature of her social media posts and her position in the sport.

We don't know if these are the same reasons Mickelson has for blocking Spiranac on Twitter, but it appears that the 28-year-old is still a big fan of the oldest major winner in the sport's history.

As well as playing golf, Spiranac also hosts her own podcast and is an ambassador for PointsBetUSA. She has over three million followers on Instagram.

NEXT PAGE: DECHAMBEAU PUMPS IRON AND CALLS OUT KOEPKA WHO IS HARD AT WORK UNDER THE LIGHTS