Paige Spiranac on being "MORTAL ENEMIES" with Phil Mickelson

Paige Spiranac gives her thoughts on Phil Mickelson after being blocked by him on both Instagram and Twitter. 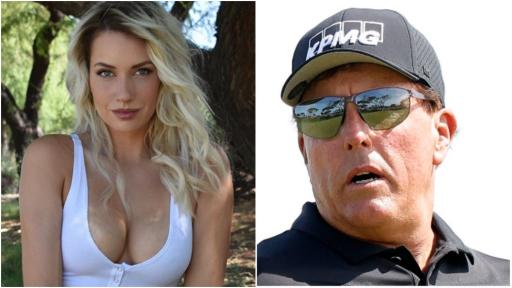 Paige Spiranac admits she is potentially "mortal enemies" with Phil Mickelson having been blocked by him on both Instagram and Twitter.

Spiranac, the social media sensation with more Instagram followers than any other golfer on the planet including Tiger Woods, took to her Instagram Story to answer a number of questions from her fans on Tuesday afternoon.

One question that arose during her Q&A session was her seemingly soar relationship with Mickelson.

Spiranac said she loved meeting Mickelson in person when she once got the chance on the PGA Tour.

But when she went to tag him and congratulate him on becoming golf's oldest major winner of all time at the US PGA Championship last summer, she realised she had been blocked on both Instagram and Twitter.

It's left Paige scratching the surface.

"So I met him and he was like so nice to me," Spiranac answered a question about her relationship with Mickelson.

"I don't know what happened, we're like mortal enemies now?!"

Spiranac then spoke about whether it bothered her or not as to whether some of her followers were not golf fans.

"No I mean whatever reason you guys are here, thanks for following," said Spiranac.

"Course I play with my sexy side, I am not shy about that one bit.

"But I also do have a lot of golf knowledge, I play professionally, I work with the best golf professionals in the world.

"I do have some good tips if you do actually want to listen."

Spiranac also addressed what she looks most for in a guy.

"So a good sense of humour is huge for me," said Spiranac.

"But really someone who loves me for me and not what I can provide for them.

"Someone who isn't afraid of a successful, driven woman. I want someone who is driven themselves, who is honest, intelligent, who has a good work ethic and who loves to work out."

Paige also revealed she has some new golf towels on the way, and they will be her very best yet.