Paige Spiranac on Bryson DeChambeau: "He is fun to HATE ON, he is an EASY JOKE"

Spiranac wants everyone to know that she "does not hate" DeChambeau, who she thought was close to tears at the US Open 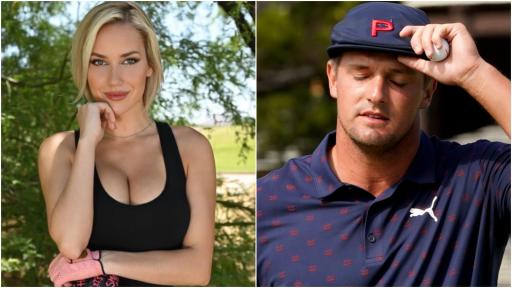 Paige Spiranac believes she may have "crossed the line" when it comes to ripping Bryson DeChambeau on her popular 'Playing-A-Round' podcast this season - and now wants it to go on record that she is "not a Bryson hater."

Spiranac, the social media sensation with more Instagram followers than any individual in the golf industry with more than 3 million, admits DeChambeau has been an easy target to pick on as a result of him doing things differently on the PGA Tour.

"He looked like he was about to cry on No.18, and I know a lot of you guys are going to say, ‘Well, it’s Bryson, it’s karma, he deserves it,’ whatever it may be, and regardless of your opinion on Bryson DeChambeau, we have all been in that position," said Spiranac on her latest podcast episode, after watching DeChambeau fall out of US Open contention on Sunday with a dismal final-round 77.

"We’ve all been on the golf course where it feels good, and all of the sudden, it takes a turn for the worst. I never want anyone to feel that way or go through that because it’s horrible, it is truly horrible."

Spiranac - who has spoken openly in the past about her own personal struggles with bullying - wants it to go on record that she "does not hate" DeChambeau in the slightest, despite what some people might think.

"I said some things about Bryson when he was acting up, being a little bit of a jerk, called him out on it, but since then, I haven’t had a problem with Bryson.

"He is fun to talk about, at times he is fun to hate on, he is an easy joke, and most of the time when I’m messing around with it, it’s a bit."

She added: "It’s all in good fun, and maybe I’ve crossed the line here or there, but I’ve just tried to do it in a humorous way."

NEXT PAGE: BROOKS KOEPKA REVEALS THE ORIGIN BEHIND HIS FEUD WITH BRYSON DECHAMBEAU