Paige Spiranac made a joke about Harry Higgs during the WM Phoenix Open which flew firmly over many keyboard warriors' heads. 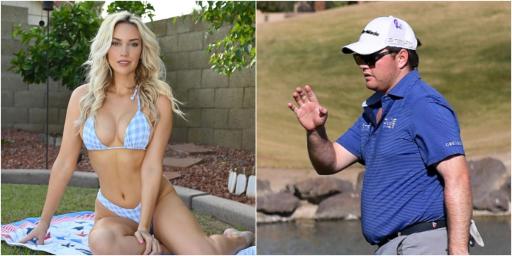 More than a few people did not get the joke Paige Spiranac made about Harry Higgs whilst watching the WM Phoenix Open.

"I can't believe Higgs would oversexualize himself for attention," Spiranac said of the PGA Tour player's shirtless celebration at TPC Scottsdale.

That tweet spread like wildfire. Higgs had ripped off his shirt after making a par putt and started twirling it over his head, showing the world his dad bod.

Even Joel Dahmen got in on the act too. Beer cans were thrown onto the green. It was bananas. It looked like a ticker tape parade.

"I would NEVER," Spiranac ended her tweet. In the replies, she goaded: "His parents must be so disappointed in him. Mommy issues for sure".

You can probably guess the rest.

Spiranac, 28, was well aware of the comments she was making which flew firmly over the head of the keyboard warriors.

Make no mistake, the following that she has (more than Tiger Woods on Instagram) means that she is a target for the trolls.

A quick glance at her social media pages reveals that across all platforms she has roughly 3.7million followers (and counting).

From every corner of the Internet Spiranac has been targeted. Before she quit pro golf, she said other golfers did not like the attention she gave the game.

It has led her to become a strong advocate against cyber bullying. She discussed this in the latest episode Golf Digest's "Be Right" podcast.

"It was really hard, because when people would come at me, it was about my golf game," she told the publication.

"As we all know, your ego is so tied in to how you play, and publicly for people to be like 'You suck, you need to quit,' that was really hard for me and I took it very personally.

"My early interviews I talked a lot about cyberbullying, and I was kind of dealing with other things behind the scenes, so I was a big advocate for that.

"Things have progressed where I've stopped playing professionally and now social media has become my career. It was hard because now I want to have a 'hot take,' but sometimes it comes at the expense of someone else, and not in a way that's bullying.

"Now I'm tweeting stuff about players, and it's funny, but I would get so upset about that before [if it were me], but it's not really bullying. I was just soft. I was a huge baby. You do have to have a good sense of humor, you have to be able to laugh things off."