Paige Spiranac slams WM Phoenix Open critics and Super Bowl Half Time Show haters - what did you make of both events? 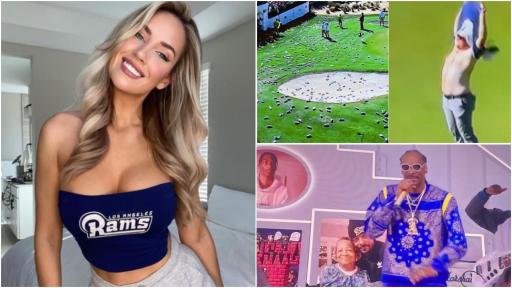 Paige Spiranac believes critics of the WM Phoenix Open can be categorised in the same bracket as those who did not enjoy the half time show at last night's Super Bowl between the Los Angeles Rams and Cincinnati Bengals.

The weekend action at the WM Phoenix Open appeared to divide golf fans, especially after witnessing thousands of beer cans being thrown onto the 16th hole on multiple occasions during the final two days of action at TPC Scottsdale.

Sam Ryder and Carlos Ortiz both made aces on the iconic par-3 hole, marking the first time in 25 years that two players had made a hole-in-one there in the same event.

Tiger Woods and Steve Stricker were the last to achieve that feat back in 1997.

Harry Higgs and Joel Dahmen also caused complete mayhem when they took off their shirts and ran round the green after Higgs had holed an eight-footer for par.

RELATED: PAIGE SPIRANAC JUST SAID THIS ABOUT HARRY HIGGS AFTER HE TOOK HIS SHIRT OFF!

Good or bad image for the sport? It would certainly seem a 50-50 split when perusing social media channels today.

One particular fan of the WM Phoenix Open though was social media sensation, Paige Spiranac, who compared haters of the rowdy PGA Tour event to being in the same bracket as those that turned off at half time in the Super Bowl.

That tweet did not go down too well with her followers, judging by the replies to her thread.

NFL's 2022 Super Bowl half time show for the first time ever was a celebration of hip hop, in tribute to Los Angeles where the game was being played.

It's fair to say some were loving the Super Bowl Half Time Show and others well, saw it as a complete turn-off.

The same people who hate this years half time show also think the waste management tournament is bad for golf. And those people are wrong.

"The same people who hate this years half time show also think the waste management tournament is bad for golf.," tweeted Paige.

"And those people are wrong."

It's fair to say Paige's followers were very much split on her tweet:

Drunken fans throwing trash and beer is not good no matter what sport it is. You would get kicked out of the stadium if you did this in any other sport. The cheering and yelling I get. The soaking others around you with beer is just boorish behavior.

Let’s be honest, apart from Dre and Snoop it was bang average.

Could say the same to you

Good call Paige. Great weekend for golf and Rap RB. These guys act like if the super bowl was in Nashville they wouldn’t play Country.

Scottie Scheffler went on to defeat Patrick Cantlay in a playoff for the Phoenix Open, three hours before the Rams defeated the Bengals 23-20 to win the Super Bowl.

NEXT PAGE: HERE'S WHAT WE EXPECT TIGER WOODS TO SAY AT THIS WEEK'S GENESIS INVITATIONAL