Paige Spiranac has given her thoughts on DeChambeau, expressing sympathy for the big-hitting American who seems to always grab the PGA Tour headlines. 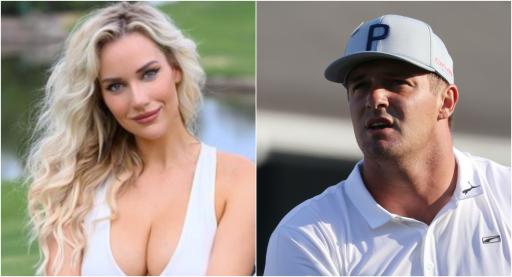 Instagram and social media star Paige Spiranac has weighed in on the 'Brooksy' debate.

Known for her strong opinions on the sport, Spiranac, who has millions of followers on her platforms, did not hold back.

She described the decision to chuck out fans who shout the term towards DeChambeau as lame.

Let me just say that I don’t condone harassment and I do feel bad that Bryson is dealing with it. We need him to make golf interesting. But how this has been handled with banning a word is only going to make it worse for him. Fix the bigger problem. It’s not “Brooksy”

Where was this energy with fans shouting 'mashed potatoes' she asked.

Spiranac has more than three million followers on Instagram.

On YouTube, she has more than 250,000 subscribers and posts course vlogs, tips and workout routines.

The social media sensation has never held back on her opinions of problems within the sport.

She has previously suggested Patrick Reed's bullish approach to the game is a positive.

Yelling “Brooksy” will get you thrown out of PGA tour events now. 1. That’s lame. 2. Where was this energy with Mashed Potatoes

Spiranac, who reportedly earns more than $2,000 per Instagram post, has also said she enjoys the back-and-forth between Bryson and Brooks.

"Give me Bryson, Reed and Brooks s*** talking all day long," she wrote.

"Hate them or love them, it's good for golf".

Spiranac has previously posted she does not comment much on the LPGA Tour as she has been asked not to.

This is because she claims she was told she is 'bad' for the sport's reputation.

Spiranac has previously spoken about hypocrisy in the sporting world.

Last week she tweeted: "All I see on TikTok is women posting about hot male athletes competing in the Olympics and how it’s the reason they are watching. A bit hypocritical when they call men out for the exact same comments and put down women who embrace their “sexy” side."

NEXT PAGE: SPIRANAC ON WHY SHE NEVER TWEETS ABOUT WOMENS GOLF