Paige Spiranac: "I can’t believe Higgs would over sexualize himself for attention" 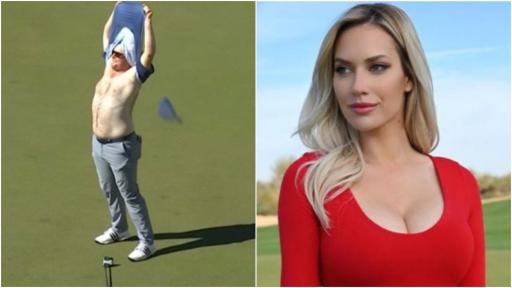 Paige Spiranac has joked about Harry Higgs "oversexualising himself for attention" after seeing the PGA Tour star whip off his shirt in celebration following a holed par putt on the 16th hole in the final round of the WM Phoenix Open.

Spiranac, who has amassed more Instagram followers than any other individual golfer including Tiger Woods with 3.2 million, tweeted her thoughts after seeing Higgs and playing partner Joel Dahmen give it large on the green at TPC Scottsdale.

Higgs drained an eight-footer for par and then lifted up his shirt.

Dahmen then followed suit, took his shirt off and flung it over his head.

Higgs then took his shirt fully off and ran around the green.

Kevin Kisner, the third man in the group, just stood in the middle of the green taking it all in.

While all this was happening, beer cans were flying everywhere, just like we saw on Saturday when Sam Ryder made a hole-in-one there.

Carlos Ortiz also made an ace on the 16th on Sunday, marking the first time that two eagles had been made on the hole in 25 years.

Tiger Woods and Steve Stricker were the last two players to achieve that feat back in 1997.

WATCH: COULD YOU JUGGLE A GOLF BALL IN A CROWD ON 16TH HOLE AT THE WM PHOENIX OPEN?

At seeing Higgs' bare chest on the 16th green, Spiranac tweeted: "I can’t believe Higgs would over sexualize himself for attention. I would NEVER."

One golf fan replied: "It's terrible that he will be judged only by his sexiness and not his game," to which Spiranac came back with: "What a horrible role model for young boys to look up to."

Spiranac is giving one of her followers the chance to play golf with her in her latest Points Bet USA Instagram competition.

She has picked the Bengals to win the Super Bowl tonight but should they lose, she will be picking one follower to join her for a round of golf.

NEXT PAGE: PAIGE SPIRANAC IS GIVING ONE FOLLOWER THE CHANCE TO PLAY WITH HER