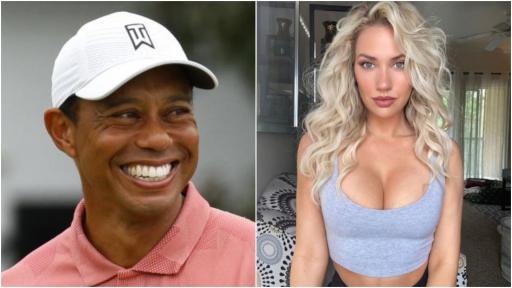 Paige Spiranac has taken to Twitter to reveal her one big wish for Tiger Woods and his son Charlie Woods to one day play in the PGA Tour's Zurich Classic.

Spiranac, who has amassed more than 3 million Instagram followers (more than even Woods himself), tweeted her view after watching the team event unfold at TPC Louisiana over the weekend.

RELATED: PAIGE SPIRANAC ON WHY HER BOOBS WOULD MAKE HER A FORTUNE UNDER THE PGA TOUR'S NEW BONUS SYSTEM

I want Tiger and Charlie to play in the Zurich as a team one day. I need it.

"I want Tiger and Charlie to play in the Zurich as a team one day," tweeted Spiranac. "I need it."

Tiger, who is currently recovering from his horror car crash in Los Angeles two months ago, was pictured for the first time over the weekend on crutches alongside his dog - SEE THE PICTURE HERE

The former World No.1 was also spotted being driven around a golf course in a golf cart while watching his 11-year-old son Charlie play golf.

Tiger and Charlie both played together for the first time in competition at the PNC Championship at the end of December, finishing seventh in the two-day event.

European Ryder Cup captain Padraig Harrington said at the time of the event: "This is the first tournament I've ever played in that Tiger Woods is playing in that he's not the star of the show.

"He should note that himself. He ain't the star of the show this week, and that's very much among the players and the pros.

"We're all going down the range, and everybody is stopping to watch Charlie. 'Move out the way, Tiger'. It's incredible the buzz it's created."

Cameron Smith and Marc Leishman ended up winning the Zurich Classic at the weekend in a playoff over Louis Oosthuizen and Charl Schwartzel.

Would you like to see Tiger Woods and his son Charlie Woods compete on the PGA Tour one day? Share your thoughts over on our social media channels now, or come and join us over on YouTube.