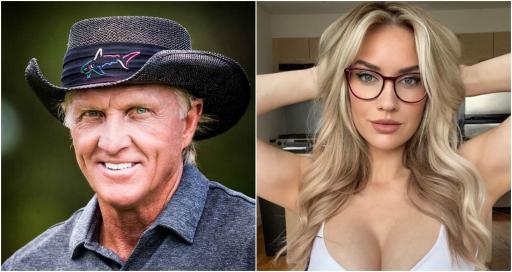 In her latest installment of "Playing A Round", the social media sensation discusses Bryson DeChambeau, Phil Mickelson and Norman.

Spiranac - who is one of the most followed golfers on Instagram - tore straight into the Aussie after his the enduring Saudi league golf story.

This was off the back of Mickelson's explosive comments which has forced several of his sponsors to pause or end their associations with him.

"He [Norman] is literally swiming with the fishies. He is just, like, not doing well. Not keeping his head above water," Spiranac said.

"He wanted the Saudi link to work out and now he is screwed."

More: Will this Paige Spiranac joke go over the top of your head?

Her co-host pointed out that Norman's "sketchy" behaviour goes back to the 90s before bringing up the "Shark" documentary soon to air.

"I don't really care to watch it to be honest," Spiranac said of the doc.

"I don't even feel like people were talking about this when it was announced," she said.

"Everything he does turns to s***," Rose said. "I don't know... just don't let him touch anything around you.

Rose is referencing the time Norman posted a picture of himself on Instagram walking his dog.

What he thought was an innocent picture in fact revealed a little bit too much.

Norman also previously turned heads when he posted a picture of himself naked in the shower with his back to the camera.

"No, no and that's coming from someone... I openly flaunt everything on Instagram but I'm not gonna be doing that when I'm 65," she says.

"Who took that picture?!" Spiranac asked. "Are they going to talk about that on the doc?"