The golf world has been reacting to footage of Keegan Bradley taking 46 seconds over a short putt at the WGC Match Play. 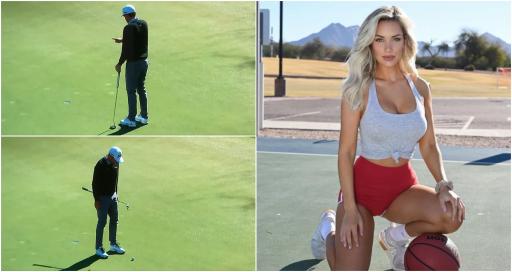 Jordan Spieth may have beaten Keegan Bradley in his day one match at the WGC Match Play but it wasn't the main talking point.

The former major winners played out what was described by some fans as an ugly slugfest at Austin Country Club on the PGA Tour.

Spieth only took the lead at the 16th hole and emerged with a 2UP victory, but it was Bradley who stole the show with a missed short putt.

We are reliably informed by data from the PGA Tour official website that Bradley was stood over this putt that measured all of four feet.

Our scene was the fourth hole and Bradley had the putt to halve the hole. He took 46 seconds over it, using AimPoint.

The footage of his anguish over such a short putt sent some golf fans crazy. It certainly wasn't a good advert for pace of play.

Not the best advert for pace of play! #WGCMatchPlay pic.twitter.com/ntP2jIdwqI

It certainly rubbed some golf fans the wrong way. Paige Spiranac waded in and described it as "nightmare fuel".

Overall, their match had four birdies. Combined. Even Spieth admitted it wasn't the best spectacle, but he was just glad to win.

Spieth told the media: "It wasn't like a pretty match, but when somebody is in position like that every hole, it makes it a little bit challenging mentally for who's playing with him, especially when I did not drive it particularly well, as good as I have been.