Paige Spiranac says she is not excited to see Scottie Scheffler continue to win as he's "just a bit boring to me". 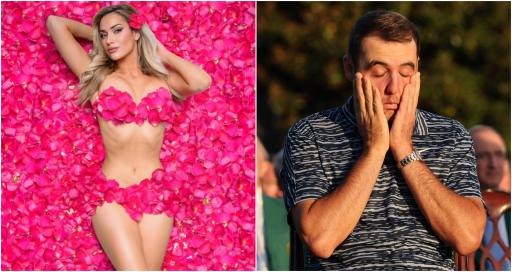 Paige Spiranac says she is not looking forward to seeing new Masters champion Scottie Scheffler continue to win because she views him as "a bit boring".

Speaking on the latest episode of her podcast Playing A Round with Paige Renee, Spiranac has given her verdict on Scheffler's dominant performance at The Masters when he won by three strokes.

She highlighted his memorable four-putt on the final green and despite the fact she thought 25-year-old Scheffler handled the moment well she says it "almost tainted" the win as it is not the type of thing Tiger Woods would do.

"I will say this, I think that Scottie Scheffler is playing amazing golf right now. I think that he is going to be a star, just because he has this very calm demeanour about himself.

"I will though say that he is not my favourite type of golfer to watch. He is a bit boring. For me, like, I love to see players with emotion. I like to see them go up and down.

"Give me a Tyrrell Hatton / [Billy] Horschel pairing every day of the week. I love that, and with Scottie, he's wise beyond his years. He's 25 years old but he just… he's a bit boring to me."

England's Hatton was not happy with his performance at The Masters when he finished on 17-over par. He described Augusta as "not being a fair test at times".

Horschel, who was paired with Hatton, was getting frustrated and threw his club in rage after sending one of his approach shots into the water.

Spiranac continued of Scheffler: "I am almost not excited to see him continue to win, because, it just… there's not that energy with him that other players have.

"And, I will say one of the best moments of the entire tournament was him four-putting on 18 to win The Masters.

"To me, it almost, tainted the win in a way, because that's not something Tiger Woods would do and of course it's like every single time a young player starts to win a lot they compare them to Tiger Woods.

"And, again, that's not something Tiger would do. I can't even imagine Tiger Woods four-putting on the last green at Augusta, he would make the birdie putt.

"And then, Scottie Scheffler is like d---ing around missing tap-ins and they're lipping out and he's kinda giggling about it.

She added: "You just four-putted, and you won by three. It was clearly a dominant performance but I think a lot us are going to think of the four-putt on 18.

"I think he handled it really well. I think everyone else was like, kinda laughing about it. It was a funny moment.

"I will say that I feel for bad for Cam Smith, because on the first tee when Scottie hit it in the trees and Cam smoked it, I was like, this is Cam's, he is going to win."

Next page: Paige Spiranac has a photoshoot ahead of The Masters