There will have been many people all over America sinking their teeth into hotdogs on July 4th and Paige Spiranac was very much part of this. 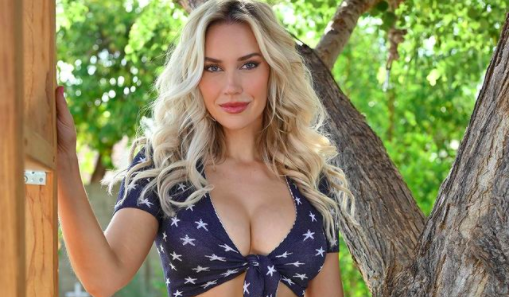 Paige Spiranac put her golf clubs down and picked up the hotdogs on Independence Day to take on a hotdog-eating challenge.

July 4th is such a historic and highly anticipated day in the United States and many people celebrate the annual holiday in many different ways.

Spiranac was taking part in the challenge on behalf of PointsBetUSA, for who she is an ambassador, and she had to eat as many hotdogs as she could in the space of 10 minutes.

To her credit, Spiranac ate six hotdogs in the allotted time which is more than enough to say that she gave it her all and put in a fine effort.

"I started off way too aggressive," Spiranac said.

"I came into this overly cocky and I thought I could get, like, 10 maybe. I honestly thought that…could not do it. I think I did decently ok."

This was a very different task and activity that the popular social influencer and golfer has never tried before, as she is usually focused on posting content on her social media pages and talking all things golf on her podcast.

Before she gained over three million followers on Instagram, Spiranac played golf collegiately at the University of Arizona and San Diego State University.

In recent weeks, Spiranac revealed that she doesn't talk about the LPGA Tour or the Ladies European Tour on her social media accounts because there are figures who don't believe she represents women's golf, due to the nature of her online content.

NEXT PAGE: RORY MCILROY NEEDS TO "WORK PRETTY HARD" ON GAME IN LEAD UP TO OPEN CHAMPIONSHIP