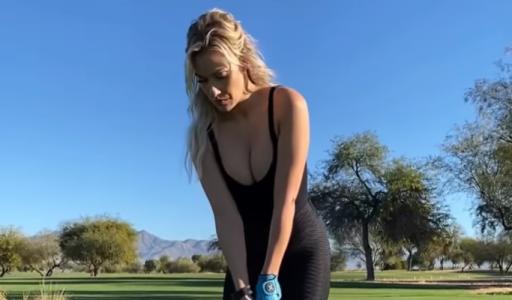 PGA Tour star Max Homa has shared a hilarious clip on social media of Paige Spiranac trying to sneak in a mulligan during a recent golf sim match between the pair.

Homa and Spiranac are both ambassadors of X-Golf, a North American golf simultator company.

Flashback all the way to last year when @PaigeSpiranac tried to sneak a mulligan in on me @xgolfamerica but no dice! pic.twitter.com/SIIitlzv3P

Mulligans, for those none the wiser, are attempts to hit the ball again from the exact same spot without a penalty.

They are absolutely forbidden in pro golf, but sometimes allowed during matches with friends.

The only issue for Spiranac was that although Homa was about to allow her to take the shot again, the sim automatically cut to the next shot.

Homa said: “Oh no! That’s really good," before adding “Oh no! It hit a tree!” Spiranac then says: “You know what? Where’s the mulligan then!”

After seeing Homa's tweet about asking for a mulligan, Spiranac then hit back in the comments: "Let’s not forget your mulligan right before this."

Homa says he does not recall that ever happening, though.

I do not recall that

Homa is a three-time winner on the PGA Tour following wins at the 2019 Wells Fargo Championship, 2021 Genesis Invitational and 2021 Fortinet Championship.

Spiranac, a former pro, now boasts more followers on social media than any other individual golfer, highlighted by 3.2 million on Instagram.

PGA Tour
Max Homa was STOLEN from, reaches out to the Internet for help
PGA Tour
PGA Tour pro Joel Dahmen with the UNLUCKIEST of breaks from bunker
PGA Tour
Has Max Homa, king of roasts, just delivered his BEST ONE yet with this zinger?!
PGA Tour
Max Homa on Brooks & Bryson feud: 'Wow, Brooks is REALLY going at this guy'
PGA Tour
Predicting the big movers for the 2021-22 PGA Tour season: 5 players to watch