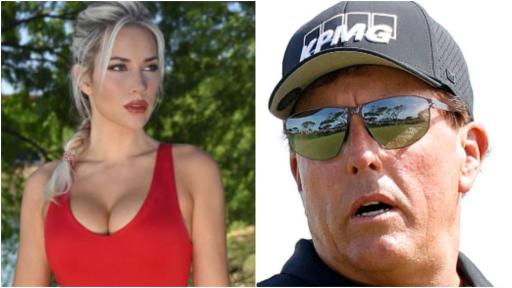 Paige Spiranac joked how she was unable to see Phil Mickelson's apology after she had been blocked by golf's oldest major champion.

Spiranac, who has the largest number of Instagram followers (3.2 million) of any golfer on the planet including Tiger Woods, replied to golf writer Alan Shipnuck's furious tweet about Mickelson.

RELATED: PAIGE SPIRANAC ON BEING "MORTAL ENEMIES" WITH PHIL MICKELSON

Biographer Shipnuck, who is writing a book about Mickelson to come out in May, sent shock waves through the sport when revealing an excerpt from a chat he had with Mickelson back in November, which was only made public last week.

Mickelson, who has been heavily linked with a move away from the PGA Tour to a new Saudi Golf League led by Greg Norman, recently told the media how he had "a once in a lifetime opportunity to re-shape the PGA Tour".

The constituency I care about is the readers. They deserve the truth. If a few players don’t want to talk to me going forward, I can live with that. But the Tour pros (and caddies and agents and Tour officials) who have reached out privately are siding with reporting over spin. https://t.co/faPLkAFjNo

Mickelson, the second highest career earner in PGA Tour history, spoke to Shipnuck  recently and called the Saudis "scary motherf***ers" and even suggested that their money had finally given him and the players leverage.

That did not sit well with just about everyone in the sport.

After receiving a heavy backlash from his peers on the circuit, golf media and fans around the world, Mickelson, who has now been dropped by his sponsor KPMG, issued an apology to the masses last night via his Twitter page.

Only Spiranac was not able to see it, given she is one of a number of people in the golfing world who have been blocked by the six-time major champion.

What did he say? I’m blocked

"What did he say? I’m blocked," tweeted Spiranac in response to Shipnuck's tweet.

I wrote out this thoughtful tweet to the Phil apology. However, I wrote “this I’m sorry but…stuff is weak” and I knew all my replies would be about butt stuff. My followers have the maturity of 13 year old boys and I respect it

Spiranac then posted: "I wrote out this thoughtful tweet to the Phil apology. However, I wrote 'this I’m sorry but…stuff is weak' and I knew all my replies would be about butt stuff. My followers have the maturity of 13 year old boys and I respect it?"

Mickelson believes the comments made to Shipnuck were "off record" but Shipnuck denies such talk.

Check out the link below to see what Shipnuck had to say about his talk with Mickelson, and what was then said on the morning the excerpt was made public.

Lefty admits he is now going to take a break from the sport as he looks to address how he goes about his daily life.

NEXT PAGE: HERE'S EXACTLY WHAT PHIL MICKELSON MESSAGED ALAN SHIPNUCK WHEN THE EXCERPT WAS MADE PUBLIC LAST WEEK!