Paige Spiranac: "You should get FREE DROPS from divots in the fairway"

Spiranac believes all golfers should be able to move their golf ball when it lands in a divot in the fairway. Do you agree? 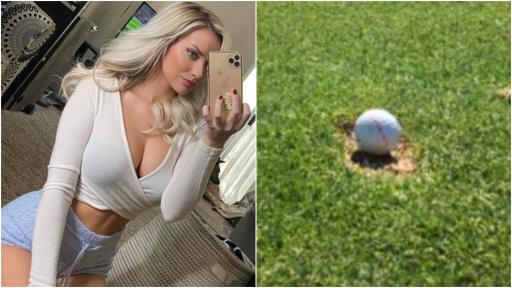 Paige Spiranac believes the time has come to finally allow free drops when finding a divot in the fairway.

Spiranac made her feelings be known on Twitter last night after watching Lee Westwood send his drive scampering down the heart of the fairway on the par-4 18th hole at Bay Hill in the final round of the Arnold Palmer Invitational, only for it to end up in a divot.

Cue more debate on whether you should get a free drop from a divot...

Great par and week from Westwood, up to No 6 in the world for DeChambeau after his eighth win on Tourpic.twitter.com/2capIH9xVk

Westwood, who trailed his playing partner Bryson DeChambeau by one shot down the final hole, duly sent his mid-iron into the heart of the green but could only match the American's par to finish in the runner-up spot.

Spiranac tweeted in capital letters: "YOU SHOULD GET FREE DROPS FROM DIVOTS IN THE FAIRWAY"

YOU SHOULD GET FREE DROPS FROM DIVOTS IN THE FAIRWAY

This isn't the first time the issue has been raised in the game. Far from it. It's been a talking point for many years.

It was certainly an even bigger talking point off the back of Spiranac's tweet on Sunday night.

Check out some of the tweets:

That’s an absolutely honkin rule, perfect drive, rolls into a divot in the centre of the fairway. Should be able to take it out 100% #Westwood

No yours is a bad take

Couldn’t agree more. I always take the free drop when I play. You should never be punished for a good shot

Plenty of good shots get randomly penalised and plenty bad shots get rewarded depending on the bounce. Just accept it (don't have to like it), hit the damn thing and move on

No way! Do you want relief from a plugged lie in the bunker too? Best and worst thing about golf is the breaks you get or don’t get.

Right?! Bryson gets relief greenside bc he claims the sprinkler is impeding his stance, yet Westwood will have to hit out of a divot in the middle of the fairway on 18 trying to catch him SMH