"Rory gets a pass?!" Paige Spiranac after McIlroy stormed out of US PGA

Paige Spiranac talks about yet more major heartache for Rory McIlroy at a frustrating US PGA Championship. 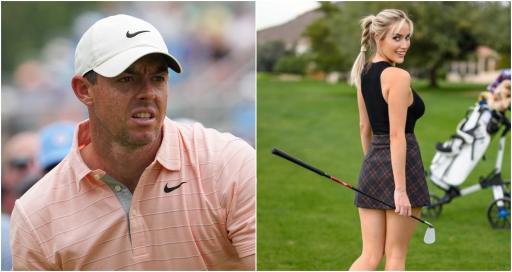 Related: Rory McIlroy declines to speak to the media at Southern Hills

McIlroy, 33, endured more heart ache when he couldn't convert a good start at the US PGA Championship at Southern Hills last week.

The Northern Irishman raced to an 18-hole lead by carding a 5-under opening round but his charge stalled on Friday and he shot himself out of contention on Saturday.

Related: Paige Spiranac responds to a golf fan who asks if her boobs are real

With only Justin Thomas and Bubba Watson as the only major winners inside the top-10 and an inexperienced 54-hole leader in Mito Pereira, it presented an unbelievable opportunity for McIlroy to add to his major haul.

Spiranac described McIlroy's exploits over the weekend as the "Rory special".

The four-time major winner raced out of the blocks on Sunday by making birdie in four out of his first five holes which was reminiscent of his run at the Masters last month.

But it was too little too late.

McIlroy decided against speaking to the media after his finished up on Sunday, perhaps a little bit frustrated with his week.

"Rory turned it down because I think Rory is just…hearing everything that everyone is saying and he's hearing what he is saying in his own head and it's just a lot.

"So, when you look at both situations [McIlroy's and Pereira's Sunday], I think you would say that he [McIlroy] would come out on top and this is again something he can learn from.

"But I feel like mentally this is something that's harder for someone like Rory to overcome than Mito. And I think it's because, again, it's the same narrative with Rory over and again.

"It breaks my heart to say this, but he's serving up the Rory special. He has the lead, he's in contention, he blows it with one round, kinda gives it a Sunday run when it doesn't matter.

"And it's like…where's this Rory that when he first came out that was fiery and had no fear? Now it's like he can't string four rounds together to get it done.

"What's going on between to his ears that's causing him to continuously do this over and over again?"

She added: "It's happening continuously now."

What do you think? Will Rory McIlroy add to his major haul at the U.S. Open in a few weeks' time? Will he win The Open again at St Andrews?

More: Caddie once hired and fired within 24 hours sacked again