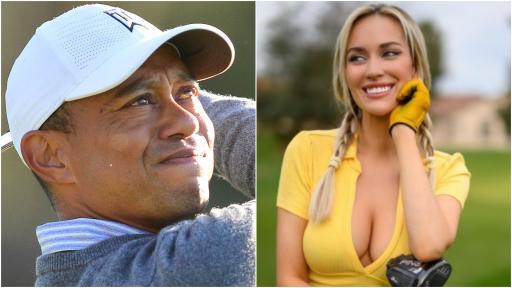 Spiranac, the social media sensation with more followers on Instagram than Woods himself, was one of a number of golfers to react to the 15-time major champion's new post.

Woods has been recovering from leg injuries sustained during his horror car crash in Los Angeles in February this year.

We had seen glimpses of Woods' recovery in recent weeks, first walking alongside his son Charlie Woods out on the course in October, and then last week hobbling on a path with his girlfriend Erica Herman.

But Woods broke the internet completely this week when posting a short video of him swinging a golf club for the very first time on camera since his car accident nearly nine months ago.

Divots look like they were made. A bucket of balls was next to him. The TrackMan was out. Woods is back. Or at least he'll try to be back.

This is the clearest sign yet that we may see Woods one last time take a crack at professional golf again.

EXCLUSIVE: OLYMPIC GOLF PHYSIO TELLS GOLFMAGIC HE WOULD BE "ASTOUNDED" IF TIGER WOODS MAKES THE MASTERS IN APRIL 2022

Can he do the unthinkable and make it sweet 16 in the majors?!

One golf fan, among many, wasn't quite so sure with Spiranac's assertion.

"He will obviously play again, and he may even win another tournament, but a major…highly doubtful," tweeted one golfer.

Then another hit back with: "Sounds like what everyone was saying before the Masters when he last won it."

What do you reckon? Will Tiger play on the PGA Tour again? Will he win another tournament again? What about landing a 16th major?! Share your thoughts on our social medda channels now.