Paige Spiranac believes a pairing of Brooks Koepka and Bryson DeChambeau would be a huge success at the Ryder Cup this week. 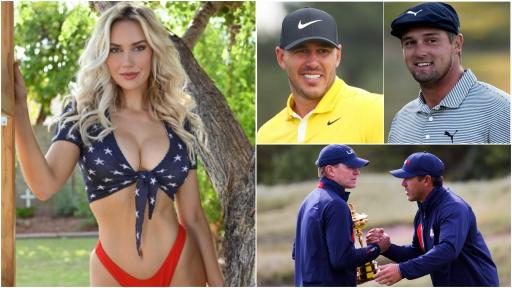 Paige Spiranac is adamant a pairing of Bryson DeChambeau and Brooks Koepka would prove "unstoppable" at the Ryder Cup this week.

Spiranac, who has amassed more Instagram followers than Tiger Woods with 3.1 million, is strong on the chances of a Team USA victory especially if captain Steve Stricker decides to stick the big-hitting American duo together for either the foursomes or fourballs at Whistling Straits.

DeChambeau and Koepka have made it no secret of their dislike for each other in recent times, but the pair have at least exchanged words on the range, and it would appear their relationship could be turning a corner ahead of USA's clash with Europe.

WATCH: BRYSON AND BROOKS EXCHANGE WORDS ON THE RANGE AT THE RYDER CUP

Bryson/Brooks would be an unstoppable team. Pair them together. It’s what we all want.

Spiranac tweeted: "Bryson/Brooks would be an unstoppable team. Pair them together. It’s what we all want."

While Stricker has not ruled it out, Spiranac's wish would seem unlikely given the frosty relationship the two have garnered on the PGA Tour.

But DeChambeau made it clear in his pre Ryder Cup interview on Tuesday that he wants to move on from his spat with Koepka, and that starts by helping United States wrestle the trophy away from European hands.

NEXT PAGE: BRYSON ADMITS "SOMETHING FUN" IS UPCOMING WITH BROOKS KOEPKA