Paige Spiranac and her podcast guests Andrew Coltart and Amanda Rose wanted to see the Brooks and Bryson pair at the Ryder Cup. 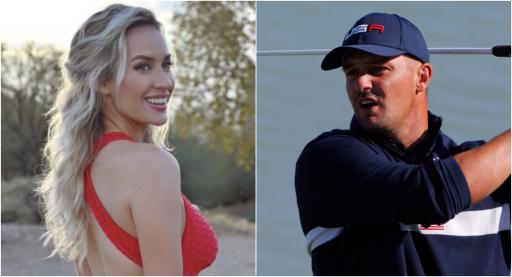 With the context of his turbulent season on the PGA Tour, being at the centre of much controversy and a public feud with Brooks Koepka, we were intrigued to see how DeChambeau would affect the Team USA dynamic.

However, he was fantastic. He engaged with the crowd and embraced his teammates to contribute 2.5 points to the record-breaking 19-9 win for Steve Stricker's side.

Spiranac, talking on her podcast 'Playing A Round with Paige Renee', was delighted to see a different side to the 2020 US Open champion and she even thought they would be paired together.

"This week was a bit of redemption for Bryson DeChambeau. I felt like he really thrived in the environment where people were cheering for him, which is something that he doesn't feel too often.

"With the way he was playing and the way he was interacting, even in his interviews after, he seemed so much more relaxed and not as on edge as he normally is when the crowd is normally against him.

"People started to like Bryson DeChambeau this week. Especially when he drove hole one and he threw his putter up in the air and everyone was screaming for him. He let his guard down a little bit and we saw the real Bryson and not who he's been pretending to be.

"I wanted to see it (the pairing) I thought Stricker was going to put them together in the very last match. It didn't happen, I got a lot of flack on social media for wanting to see that."

Former European Ryder Cup player Andrew Coltart and golf analyst Amanda Rose also thought that DeChambeau and Koepka could have been paired together, as they had been seen conversing in the practice sessions.

The American duo, who have won five major titles between them, have been through a spat that began at the 2021 PGA Championship when Koepka reacted to DeChambeau making noise behind him in an interview.

Various exchanges and comments have been made since, but both of them assured captain Stricker that the tension would be no issue at the Ryder Cup.

Coltart, who now broadcasts for Sky Sports Golf, is now bored of the feud and believed there was a chance that we could have seen them paired together.

"The spat they've had has been pretty pathetic. Everybody needs to get over it. I've seen these things happen before when you have two people who don't get along. The one way to try and figure it out is to make them fight for one another," Coltart said.

"There was an opportunity to do it on day two when a foundation had been created. Sadly, we didn't get the chance to see it, but it would've certainly provided an awful lot of talking points, that's for sure."

NEXT PAGE: 'SHAMBOLIC': GOLFERS IN VICTORIA, AUSTRALIA UP IN ARMS OVER IDIOTIC TOILET BAN