Royal Cinque Ports Golf Club review: Kent's characterful links is among the best the UK has to offer. 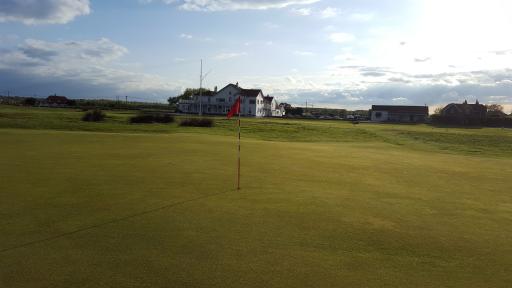 No one I spoke to in Sandwich seemed sure of how to pronounce Cinque. I’m still not 100%. I went with the pronunciation that rhymes with “sink”. They laughed. But then they always laugh. And laughing was a common theme from the day, for I was chuckling the entire way around this ingenius lump of land.

Categorise this track in with the “those who know, know” band. Because this is a world-class layout, but you don’t often hear it in golfer’s “best of" lists. But let’s hope it stays that way, because it’s part of the charm.

The entry has golfers driving alongside the sea, crossing sheep and cow fields, forcing vehicles to maneuver small country lanes. We felt a long way from the city.

And as we arrived, the sleepy, understated but affable atmosphere poured over us. When checking in at the pro shop, we were welcomed with “there aren’t many people out - tee off whenever you’re ready”. This is akin to perfect waves with no one in the water to a surfer - that is to say a rare delight. And my word, were we treated.

Sandwich, Kent. One of the greatest stretches in golf, with Prince’s, Royal Cinque Ports and Royal St Georges layered side-by-side.

It’s served by a fast train from London, and is easily accessible by car.

We stayed at the Lodge at Prince’s, which offers comfortable, spacious rooms at reasonable prices. It also has a friendly, un-fussy atmosphere - sadly a rare commodity among historic golf courses.

It hosted the Amateur Championship as recently as 2013, and continues to be an Open qualifying venue.

The course was heavily damaged in the First and Second World Wars, but James Braid lent his craft to bring it back to life. Guy Campbell later made more changes in 1946, and Gordon Irvine was influential in making more amendments in recent years.

Nine out, nine in. Why change a winning formula? Royal Cinque Ports is pretty much that. The first starts in the wrong direction, but then you’re off and running.

The front nine mainly hugs the coastline, so close you can almost grind the salt and sand in your teeth. The winds are often blowing with you on the opening stretch, and this is where you need to pick up points. Because as you make the turn and play into the wind, the beauty transforms to the beast.

Throughout, the fairways don't seem that narrow, but they run fast so are easy to miss. Like all great links courses, the are nodules all over and they slant and slide in every direction. Fall off them and you find the thick grass, often wet and heavy. It’s no fun in there.

The greens are just as unruly. Large, meandering, and brutish. They, like the entirety of the course, are of the highest quality.

But it’s the imagination and character that sets Cinque Ports apart for us. The design is far from clownish, but is stuffed full of fun.

Plunging par threes, elevated tee shots, tiered greens, drastic run offs - there is so much personality, almost every hole is good enough to be put on a chalkboard and analysed.

And the fact you are almost on the beast serves up some stunning vistas.

Bunkers - both in the fairway and surrounding the green - are surgically places and inviting. You will be punished should you find them, but not overtly. A well struck recovery can bring fleeting joy. Which cannot be said for many sand traps on old links.

The greens at Cinque Ports are outrageously good. Some of the best we have ever traversed, actually. Twisting, turning, snarling beasts. But full of that word again - fun.

The history is in the ground as you walk around, but the layout does not feel old fashioned one jot. It’s a design of the highest order, and is worth travelling from all over to test.

There is a spectrum in golf course architecture - the “boring to fun spectrum” we call it. At the extremes of the fun end are “Mickey Mouse” courses. At the other end are the flat tracks. Somewhere in the middle is perfection, but it’s an elusive ground. It’s so easy to slip either side, and so many do. But this is exactly where Royal Cinque Ports resides.

The round is characterful, fun, exciting. It’s a course where golfers need to drive well, and forces players to plot their way round and really think about their approaches, for greens are undulating.

Running along the Kent coast, the beauty is balanced by the often monstrous winds...and rain.

It is a golf course of the absolute highest calibre, drenched in history and folklore.

The best bit - considering the quality on show - is that often the only onlookers are cows. And they don’t care if you shoot 67 or 107.