Richard Bland has been wearing a hat all week from The Wisley Golf Club in Surrey. 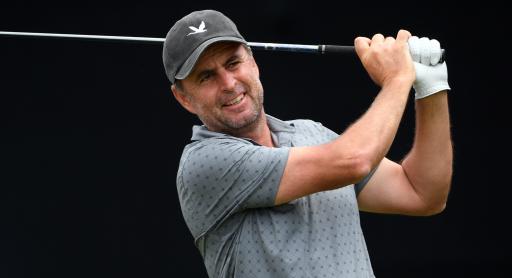 Richard Bland refused an offer from PointsBet Sportsbook, an American bookmaker that popular social media influencer Paige Spiranac is an ambassador for.

The Englishman received a tweet from the popular sportsbook which offered him a chance to be sponsored by "America's most innovative sportsbook," according to their message.

Although the company also offered him "excellent health and dental benefits," Bland declined and said that he intended to remain loyal to his current sponsors who have given him support throughout his career.

Thank you for the kind offer! But I promised @The_Wisley to wear their hat all this week! & intend to keep that promise to the members who support me! Thank you again

The 48-year-old replied to PointsBet Sportsbook to say that he would remain loyal to The Wisley Golf Club in Surrey, which has been represented on Bland's cap all week.

The bookmakers are clearly very keen to take on popular figures in the golfing world, which is shown by their partnership with Spiranac. She has gained a large following across her social media platforms, as well as thousands of listeners to her "Playing A Round with Paige" podcast.

There wasn't a dry eye in the house when Bland won the Betfred British Masters last month when he beat Guido Migliozzi in a playoff at The Belfry.

This was his first-ever win on the European Tour after almost 500 starts and now he has gone from strength to strength at the US Open. Bland entered today's third round holding the joint lead on 5-under-par with Russell Henley and there is a serious chance that he could secure his maiden major title.

NEXT PAGE: SERGIO GARCIA SUFFERS UNLUCKIEST BREAK IN THIRD ROUND OF US OPEN