Phil Mickelson has finished as US Open runner-up a record six times - we rank them. 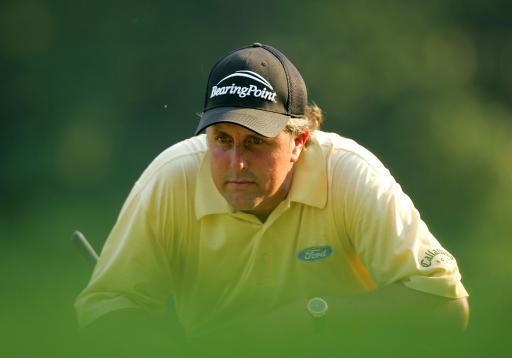 Mickelson traveled to North Carolina with a beeper, ready to pull out as his wife was about to give birth to their first child. But with the beeper dormant, he entered the final day a single stroke behind leader Payne Stewart.

Mickelson took the lead by one after 15 but was unable to get up-and-down to salvage par on the 16th as Stewart drained a 25-footer to draw level.

Lefty then missed an eight-foot birdie putt on the 17th, while Stewart holed out and went on to slam-dunk an 18-footer for par on the last, snatching the trophy out of Mickelson's mitts. Mickelson's caddie Jim "Bones" Mackay admits if he could read one putt again in his life, it would be Phil's on 17 at Pinehurst.

"I think it would have made for a cool story for my daughter to read about as she got older," Mickelson said later. "But this is still something special."

Mickelson finally shed his "best player never to win a major " tag at the 2004 Masters, and with the monkey off his back was favoured to win a second major in a row on Long Island.

After 36 holes, he was the joint leader with Shigeki Maruyama following rounds of 68 and 66. By the final day, South African Retief Goosen led by two strokes but Mickelson mounted a charge on the back nine to take the lead with just two to play.

But then came the 17th. Mickelson double-bogeyed the par three, after three putting from about five feet, while Goosen finished with a birdie and two pars to win by two.

"I fought hard the whole day," Phil said. "Boy did Retief play well. I want to give him credit, he played so solidly and deserved to win."

Mickelson’s most infamous implosion. The American arrived in New York at the peak of his powers, having just won the Masters for a second time. He had also added a US PGA the year before.

The left-hander stood on Winged Foot's 18th tee with a one-shot lead, and seemed destined to end his barren run in the US Open. A wild tee shot that bounced off a merchandising tent and into the rough was a pre-cursor for what was to come.

Mickelson’s second hit a tree, and he found the sand with his next effort. After splashing out, he was left with a chip from the rough for bogey to force a play-off with Geoff Ogilvy. Nada.