England's Dan Bradbury, 23, emerged victorious at the Joburg Open on the DP World Tour in only his third start on the circuit. 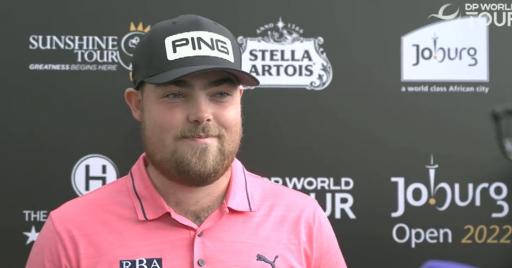 England's Dan Bradbury says it will "take a few days" to sink in after emerging victorious at the Joburg Open on the DP World Tour.

Some professionals take a long time to find that breakthrough victory.

Think of LIV Golf player Richard Bland who needed 478 starts on the European Tour before finally joining the winner's circle at the 2021 British Masters.

For Bradbury, he only needed three. The 23-year-old - who is from Wakefield - was even playing on a sponsor's invite.

Talk about making the most of your opportunity. After 72 holes, his margin of victory was by three shots.

His exploits also saw him earn a spot at next year's Open at Royal Liverpool Golf Club in Hoylake.

"It is going to take a few days for this victory to sink in," he said.
"What I have achieved is unbelievable. It's just a lot of pressure taken off your back - that's nice, and the victory was all the more special because my mother was here to witness it."

It might not be a LIV Golf winner's cheque for $4m, but Bradbury earned $165,000 this week. He's also earned himself a two-year exemption on the DP World Tour.

Bradbury's 263 shots this week saw him finish on 21-under par, which was three ahead of Finland's Sami Välimäki.

Välimäki hit "one of the worst shanks you will ever see in your life" on Saturday.

Started on an invite, finished as a winner.@DanJBradbury is a winner on the DP World Tour!!!#JoburgOpen pic.twitter.com/G7vmmOh99r

It makes it even more the impressive that Bradbury's victory was wire-to-wire, as his four rounds of 63, 66, 67, 67 saw him leading at the end of play every single day.

Next up is the Investec South African Open at Blair Atholl Golf & Equestrian Estate.

Next page: Cameron Smith dedicates latest win to his grandmother