Sergio Garcia to wear limited-edition polo and GolfMagic is giving away a signed prize! Check out our special feature on one of the game's greats... 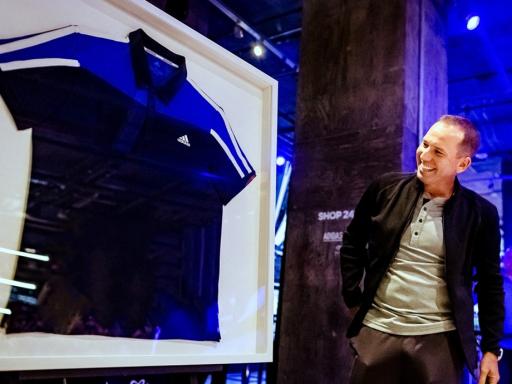 In 1999, a 19-year-old named Sergio Garcia burst onto the golf scene at the US PGA Championship when he hit an eyes-closed shot behind a tree in the final round and jumped his way up the fairway.

This week, adidas Golf is commemorating that special moment by offering a throwback limited-edition polo to celebrate the 20-year relationship between Garcia and the brand.
The limited-edition polo ($65) patterned after the design he wore in 1999 will be available in limited quantities at the adidas flagship store on Fifth Avenue in New York City and on adidas.com.
To celebrate the 20-year relationship, adidas looked to one of the most iconic moments in Sergio’s career: the final round of the 1999 US PGA Championship.
Then relatively unknown, the 19-year-old Garcia captured the attention of golf fans around the globe by nearly winning the Wanamaker Trophy in his first attempt. Fans will remember one moment in particular during that final round when he hit his tee shot on the 16th hole at Medinah Country Club.
Garcia's ball came to rest behind a large oak tree just off the fairway, assumedly blocking any chance to reach the green. Much to the surprise of announcers and viewers alike, Sergio found a way to hit an eyes-closed shot, running and jumping his way up the fairway after he hit it to see if his ball had found the green. It had.

During this unforgettable moment in the final round, Sergio was wearing a unique adidas Golf polo design taking in hues of dark and light blue with a bold and expressive white 3-Stripes pattern across both shoulders.
Garcia turned professional after earning low-amateur honors at the Masters Tournament in 1999. Upon joining the professional ranks, the Spaniard entered into an agreement with adidas to wear apparel and footwear on the course. 20 years later, Garcia joins an elite group of athletes – David Beckham, Steffi Graf, Stan Smith, to name a few – to have more than a 20-year relationship with the 3-Stripes.

Motocaddy Pro 3000 Laser Review - Best Golf Rangefinder 2021
PING SensorDry Review - Best Waterproof Jacket of 2021?
The 2017 Masters champion has 34 professional wins to his name and has proven a major thorn in the United States Ryder Cup side down the years with a 22-12-7 (WLH) record.
Garcia - who has played in every European Ryder Cup since 1999 except for 2010 - became Europe's all-time leading points scorer in the Ryder Cup after he beat Rickie Fowler 2&1 in Sunday's singles clash to move to 25.5 career points. The Spaniard's victory against Fowler, secured after Francesco Molinari had already put the winning point on the board to regain the Cup, saw him pass Nick Faldo's mark of 25.
“Anytime you can look back and say you’ve had a relationship with an athlete for more than 20 years, that’s a unique moment,” said Jeff Lienhart, president, adidas Golf.
“Sergio has been one of our greatest creators and we consider him part of the family. We’re wishing him continued success both on and off the course.”

GOLFMAGIC IS GIVING AWAY THE NEW SHIRT, WITH A SIGNED PHOTO FROM SERGIO! HEAD TO OUR SOCIAL MEDIA CHANNELS AND YOUTUBE TO LEARN MORE!

Let's take a look at some of Garcia's standout moments on Tour the past 20 years...

Garcia hit the headlines when earning his maiden European Tour title at the Irish Open, shortly before winning in Germany in October. Sandwiched in between those wins, Garcia famously finished runner-up to Woods at the 1999 US PGA. The fresh-faced Spaniard, just 19, fought Woods long and hard on the back nine but unfortunately came up one stroke shy for the Wanamaker Trophy. As a result of his performances, Garcia broke into his first European Ryder Cup side and joint top scored with 3.5 points for the week at Brookline. However, it was all  consolation for Garcia as the United States won 14.5-13.5.

Garcia clinched his maiden PGA Tour title at the Mastercard Colonial in 2001, with it, becoming the youngest Tour winner since Woods in 1996 at age 20. He then progressed again to land the Buick Classic later in the year on the PGA Tour, and continued to impress in Europe when taking the Trophee Lancome.

With the wins piling up, Garcia was building in confidence and stature - depicted none better than finishing in the top 10 in all of the four majors in 2002 - something only a number of golfers can attest to doing. The year got even better for Garcia when he won his first Ryder Cup with Europe when taking three of five points.

Garcia had accumulated 11 wins on the PGA and European Tour, on top of three Ryder Cup wins and 13 top-10s in the majors, by the time he rocked up at the 2008 Players Championship. While Garcia's previous wins and performances had been impressive, his biggest victory of them all came at TPC Sawgrass that week as he saw off Paul Goydos in a playoff. The only downbeat on Garcia's year was failing to win a single match at the Ryder Cup as Europe lost to the USA by a commanding five points.

Garcia had fallen off the wheel the two years after his Players victory, but soon got his foot back on the gas when taking back-to-back wins on home soil in October 2011, highlighted by a emphatic 11-stroke victory at the Castello Masters. It would open the floodgates to a solid 2012 campaign that saw Garcia win again on the PGA Tour at the Wyndham Championship, before helping Europe defeat the United States for his fourth Ryder Cup win.

In January 2014, García won the Qatar Masters to get back inside the world's top 10. He would then go on to finish joint runner-up to Rory McIlroy at The Open, marking the second time he had finished in second at the tournament and fourth time in a major championship. Garcia would also contribute to the European Ryder Cup team's victory against the United States at Gleneagles, taking 2.5 points.

Garcia enjoyed the greatest season of his career in 2017 when landing three victories, of course highlighted by his maiden major title at The Masters. It was Garcia's 74th major championship and became the third player to slip on the Green Jacket following the late great Seve Ballesteros and Jose Maria Olazabal. The victory fittingly came on what would have been Seve's 60th birthday.

Arguably out of form, Garcia was questioned by a number of pundits after receiving one of captain Thomas Bjorn's four European Ryder Cup wildcards. But he instantly repaid the faith of the Big Dane to take three of four points at Le Golf National, contributing to Europe's heavy defeat of the Americans (17.5-10.5). With his performance, Garcia became Europe's all-time leading points scorer in the Ryder Cup after he beat Rickie Fowler 2&1 in Sunday's singles clash to move to 25.5 career points. The Spaniard's victory against Fowler, secured after Francesco Molinari had already put the winning point on the board to regain the Cup, saw him pass Nick Faldo's mark of 25.