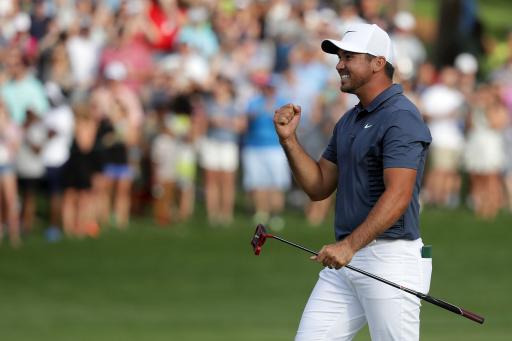 Jason Day was the first to admit he didn't have his A-game on display en route to a 12th PGA Tour victory at the Wells Fargo Championship on Sunday. Not even his B, or maybe even C-game to be frank.

But two areas that were particularly sharp for the 30-year-old Australian - as always - were his short game (TaylorMade Milled Grind wedges in 50 and 56 degrees, as well as a new 60-degree Hi-Toe lob wedge) and putting (TaylorMade Spider Tour Red).

Day was particularly errant off the tee in the final round, finding a handful of fairways, but he made amends around the greens to shoot a final-round 68 and win by two strokes on 12-under par. The former world number one ranked fourth in strokes-gained around the green (4.962) and second in strokes-gained putting (8.245), while he was tied 97th for driving accuracy (48%) and tied 104th for greens in regulation (56%).

Day, who now moves to world number seven with his second win of the PGA Tour season, had not been happy with his ball striking earlier this season and recently made the switch ahead of The Masters to a new set of TaylorMade P730 irons.

“I wasn't quite happy with how I was hitting it at the Match Play,” said Day at Augusta National.

“I was launching it a little bit higher and spinning a little bit too much. You have to be able to control your trajectory and your spin. So hopefully with a little bit of a change, that could spark something. And you never know, hopefully I can come into a week like this and really hit a lot of greens and give myself opportunities.”