The new ForeCaddy electric trolley from Foresight Sports has four modes of operation, with one of them being a follow function. 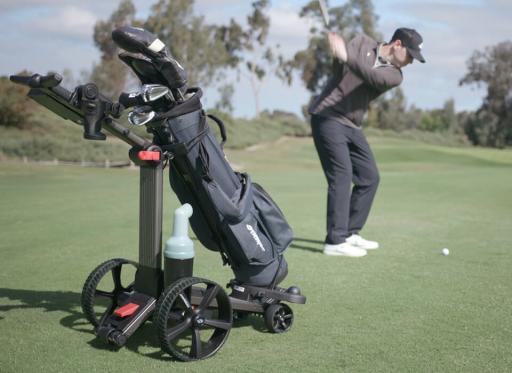 Foresight Sports, one of the leading launch monitor brands in golf, has just announced the ForeCaddy, a brand new electric trolley that has four different modes of operation.

Many of the best players in the world use Foresight Sports technology to get a better understanding of their golf game, by using the brand's state-of-the-art launch monitors such as the GCQuad and the GC2.

Bryson DeChambeau, who recently won the PGA Tour's Arnold Palmer Invitational at Bay Hill, uses a Foresight GCQuad during every practice round, so he can check the progress of his data, such as ball speed and launch angle.

The brand that has been at the pinnacle of data capturing is now entering the electric trolley game and its new ForeCaddy trolley looks seriously impressive.

Manual - for those who want to go old school and push their trolley around themselves.

Power Assist - the ForeCaddy will carry its own weight whilst you direct it.

Remote Control - control the speed and direction of the ForeCaddy with a small handheld device.

Follow - when the ForeCaddy is in this mode, the trolley will simple follow you wherever you go, without the need to touch or direct it.

With two simple clicks of a button, the ForeCaddy folds to make storage in your car boot or garage easier and with other features including a cup holder, umbrella holder, phone charger and more, the ForeCaddy electric trolley will ensure you make the most out of your round of golf.