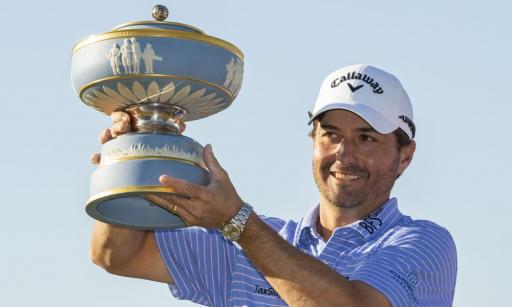 After losing out in the final to Bubba Watson 12 months ago, Kevin Kisner took down Matt Kuchar to win the WGC Match Play at Austin Country Club.

The Secret to Backspin

Kisner closed out Matt Kuchar, 3 and 2, with a 28-foot birdie putt on the 16th green to secure the biggest victory of his professional career.

The win marks Kisner's third on the PGA Tour following wins at the 2015 RSM Classic and 2017 Colonial.

“I was thinking out there it might be the hardest one, just because you have the physical aspect more than any other week,” Kisner said. “It was grueling, definitely with the winds, the temperature today.

“Overall, it was a long week, but I prevailed and [I’m a] world golf champion.”

Kisner defeated Ian Poulter in a playoff on Friday afternoon before beating Haotong Li, Louis Oosthuizen and Francesco Molinari on his way to the final.

The win was redemption on the WGC Match Play for Kisner following his 7&6 defeat to Watson last year.

IN THE BAG: KEVIN KISNER