Patrick Reed is no longer a Nike golf athlete and chose to wear G/FORE apparel at the Sentry Tournament of Champions because he likes the brand, not because they are a new sponsor. 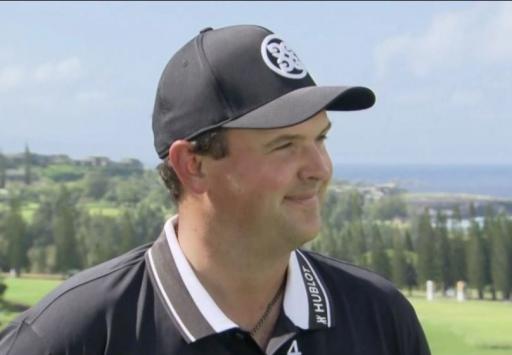 Patrick Reed caught the attention of golf fans during the first round of the Sentry Tournament of Champions on Thursday after he played the first round wearing a G/FORE polo and a Titleist cap, after his apparel deal with Nike came to an end.

NEW REPORT: PATRICK REED IS BACK IN A G/FORE SHIRT AT THE OPEN DESPITE RECENTLY SIGNING A NEW DEAL WITH CASTORE?!

Details as to why Reed is no longer a Nike golf athlete are yet to be known, but due to Reed being a free agent with equipment, many golf fans thought he had signed a deal with Titleist after seeing him rock one of their caps, but that's not the case.

GOLF Magazine managing equipment editor Jonathan Wall tweeted during the opening round in Hawaii to clear up any confusion surrounding Reed's choice of hat and polo shirt.

"Gonna clear this up before rumors get started: Patrick Reed is wearing a Titleist hat this week, but he’s NOT on a staff deal. Does have a ball deal. Needed a lid for the week now that he’s no longer with Nike and chose Titleist," said Wall.

Gonna clear this up before rumors get started: Patrick Reed is wearing a Titleist hat this week, but he’s NOT on a staff deal. Does have a ball deal.

Needed a lid for the week now that he’s no longer with Nike and chose Titleist. pic.twitter.com/w45FeCheTh

According to Golf WRX, Reed purchased some new G/FORE apparel because he simply the brand.

UPDATE; Patrick Reed is not sponsored by G/FORE following departure from Nike, but instead purchased the apparel himself because he likes the brand. (Via @GolfWRX)

Some fans saw the funny side of it and were quick to draw comparisons with a certain famous movie star:

Shoulda gone with the backward beige to really complete his look pic.twitter.com/PViSOl2Lkv

Reed has been one of the most in-form players on the PGA Tour as of late and got off to an excellent start to kick-off his year, with a 6-under par round at Kapalua, just two shots behind leaders Justin Thomas and Harris English.

Although he finds himself well in contention after the opening round, Reed felt slightly disappointed not to have shot an even lower score.

"It's kind of one of those days I left, felt like I left a lot of shots out there, a lot of little short irons and kind of soft shots that kind of got me," he said after signing for a 67 on Thursday.

"Normally those are ones that are kind of bread and butter for me. I kind of go and hit tight. And I had a couple ride the face on, a couple of lobbies, and then on top of that, had a couple short irons I was just trying to hit softies that kind of got away from me.

"But as a whole, I mean, if you were to tell me signing up for a 6-under at the start of the week, anyone would probably take it. So I put myself in position that's all I really could ask for."

Apart from his golf ball deal with Titleist, Reed remains a free agent when it comes to equipment and the World No.11 hasone of the most mixed bags on the PGA Tour.