PING Glide 3.0 vs TaylorMade MG2: Which Wedge Is Right For You?

The PING Glide 3.0 and TaylorMade MG2 wedges are both fantastic options, but which one suits your game? 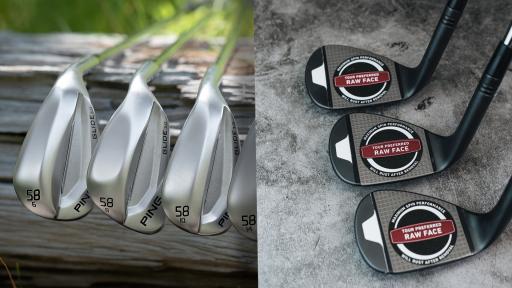 The PING Glide 3.0 wedges and TaylorMade MG2 wedges are two of the best wedges to hit the market in recent years, but which one is better for you? Both offer something different in terms of design and performance, so check out our video to see which wedge suits your game.

In the Glide 3.0 wedges, PING’s engineers put a premium on the feel and forgiveness by leveraging a multi-material construction, which allows for a larger insert covering more of the back of the face, resulting in activation of the elastomer at impact to produce a soft yet solid feel.

The new cavity design and larger CTP expand the perimeter weighting to increase the MOI and position the centre of gravity higher to yield lower-launching, higher-spinning trajectories for more control.

With an emphasis on expanding the wedge sole options to better custom-fit golfers, PING engineers crafted four different sole grinds in the Glide 3.0 series. Each is designed to best match a player’s angle of attack and typical turf conditions while providing performance and versatility on full and partial shots around the green.

The MG2 wedges from TaylorMade followed on from the success of the original Milled Grind wedges, but this time we were introduced to a new raw face design.

Once you remove the air-tight seal from the face of the club, the raw face begins to develop over time, eventually giving you that rusty effect to optimise spin and feel, while it also stops the sun from glaring off the club face.

ZTP Raw Grooves offer sharper, deeper and narrower grooves and a sharper radius, which further combined with a rougher surface from the laser etching between the grooves, enable the golfer to create more friction between the clubface and the ball generating more greenside spin.

The MG2 wedges are with a CNC Milling machine making it much easier to repeat specific grinds, which also produces a fantastic look to the wedges as well.

You can custom fit your MG2 wedges with either a standard bounce or a low bounce to tailor them to suit your swing type.

From a design perspective, I think that the MG2 wedges might be the best looking wedges that TaylorMade has ever produced. The combination of simplicity and elegance is unrivalled in the industry. The wedges look clean, modern and highly appealing over the ball and both colourways are very striking.

The PING Glide 3.0 wedges are also extremely strong in terms of looks. They have a clean and modern look which has been produced through its simplistic design.

In terms of performance, I think if you’re looking for forgiveness then you will absolutely love the PING Glide 3.0 wedges, as they’re one of the most forgiving wedges we have ever tested.

They also produce a slightly lower ball flight than the MG2’s which is something you need to consider when buying new wedges.

The MG2 wedges from TaylorMade produced fantastic spin control thanks to the raw finish on the face. The spin was consistent which is so important around the greens, plus the feel is very soft which helps to grow your confidence and play a wider range of shots.

From a personal perspective, I favour the MG2 wedges and I carry them both in my bag, but I use a PING Glide 3.0 lob wedge which is fantastic out of the bunkers.