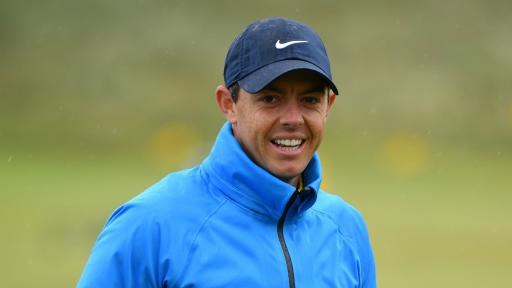 Nike Golf tapped Stone Island for a golf-focused collection made to tackle all weather conditions in golf's final major of 2019.

As worn by home favourite McIlroy, the collaboration includes two innovative pieces that take technical apparel to a whole other level.

The Nike Golf x Stone Island collection features a jacket and a crew neck sweater, of which both pieces boast a ton of golf-specific features including pockets for balls, tees and gloves.

The collection is available in two and three colourways respectively, with each item crafted from a military grade cotton satin for an ultra breathable experience that doesn’t compromise on water resistance. Stone Island's adaptive fibres also make an appearance, locking in warmth and maintaining optimal body temperature.

“One of the things that has always made me enthusiastic is that those who love sports love Stone Island. Golf particularly fascinates me, because it is a precision game in which concentration and power play a fundamental role on athletic gesture and on performance,” said Stone Island's creative director and chairman Carlo Rivetti.

“Working on garments with Nike Golf gave us the opportunity to create true technical and performing pieces. It is the first time for Stone Island on the field of play, in one of the most noble sports in the world.”

The Stone Island x Nike 2019 collection will be available to purchase from July 25 on the Nike website and stockists.

This all started when I was a kid, chipping balls into our washing machine. #TheNikePolo #TeamNike

When the sun eventually came out at Royal Portrush, McIlroy was also seen wearing a Nike Golf  Dry-Fit polo with a washing machine logo - throwing it back to when a fresh-faced Ulsterman first appeared on television screens in 1999 when chipping balls into an open machine on UTV's 'Kelly Show'.

“Just Nike sort of doing what they do,” said McIlroy.

“They wanted to do something special for me this week. Thought washing machine, I grew up here, long winter nights hitting golf balls into my mom’s washing machine, so it was a nice little touch.”