Piers Morgan stormed off of Good Morning Britain on Tuesday and now Eddie Pepperell has made a special request to the European Tour. 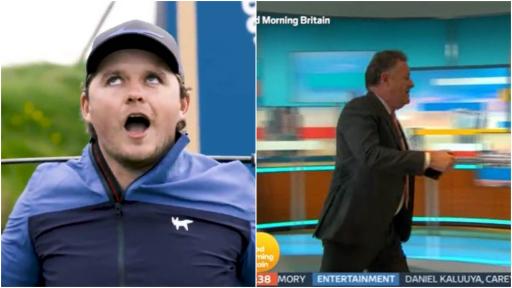 Eddie Pepperell is the latest celebrity to mock Piers Morgan after the Good Morning Britain anchor stormed off of set on Tuesday after facing criticism from ITV's Alex Beresford.

Known for his Twitter antics, Pepperell was quick to react to the incident involving Morgan, that became the No.1 trending topic on Tuesday morning.

Morgan is a regular at the Alfred Dunhill Links Championship, where celebrities play alongside the professionals, with the likes of Justin Timberlake, Bill Murray, Jamie Rednapp and Luis Figo have all making an appearance in the past.

"I’d quite like to play with Piers Morgan in the Alfred Dunhill Links this year please European Tour. We both like to drink wine, we're both pretty active on Twitter. And we both like to walk off when things aren’t going well," Pepperell said on Twitter.

I’d quite like to play with Piers Morgan in the Alfred Dunhill Links this year please @EuropeanTour. We both like to drink , we’re both pretty active on Twitter. And we both like to walk off when things aren’t going well.

The recent Harry and Meghan interview with Oprah Winfrey was the topic of conversation on GMB on Tuesday morning and Morgan was receiving criticism from Beresford, who slammed the controversial host over his recent comments about Meghan Markle.

Morgan, who is known for berating plenty of people on the show, couldn't handle someone rightfully putting him in his place, so he decided to walk off of the set.

WATCH MORGAN STORM OFF OF GMB BELOW:

After "cooling off" for a while, Morgan returned to his seat and the conversation continued, where he decided to then play the victim.

You'd think someone who spends his life talking sh*t about people would have more of a backbone, wouldn't you?

Anyway, I won't go off on one about Morgan, but well played Mr Pepperell, well played.