American John Catlin has been disqualified from this week's English Championship... 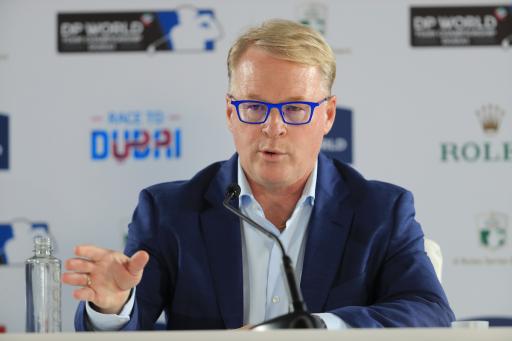 The European Tour has disqualified a player from this week's English Championship at Hanbury Manor after both he and his caddie broke their COVID-19 protocols that have been in place since the start of the circuit's six-week UK Swing.

American John Catlin and his caddie were caught eating dinner in a local restaurant away from Hanbury Manor in Hertfordshire on Tuesday night.

Under European Tour rules, all players and caddies must stay within the Tour's 'bubble' that involves the course and a designated hotel. Players and caddies are therefore not permitted to go elsewhere to eat food.

"The European Tour has withdrawn American John Catlin and his caddie Nathan Mulrooney from this week’s English Championship at Hanbury Manor following a breach of its COVID-19 protocol," read a European Tour statement on Wednesday.

"The duo visited a local restaurant on the evening of Tuesday August 4 outside the tournament bubble, hence compromising the Tour’s health guidelines, and were withdrawn from the tournament with immediate effect as a result."

Catlin has immediately apoligised to his peers and the European Tour for his mistake.

"I apologise to my fellow players and everyone involved with the tournament this week for this error of judgement," said Catlin, ranked 242nd in the world rankings.

"I understand the European Tour's decision and accept the sanction."

The mistake is even more bizarre when you consider Catlin played in last week's Hero Open, so clearly knew what protocols were in place during the week at Forest of Arden.

Catlin, who finished tied 51st last week, will be replaced in the field by South Africa's Wilco Nienaber.