Golf fans react to Rory McIlroy's club being KNICKED by a random man!

RORY SHOCKED BY GOLF FAN! "Imagine what would have happened if Rory had Stevie Williams on the bag!" 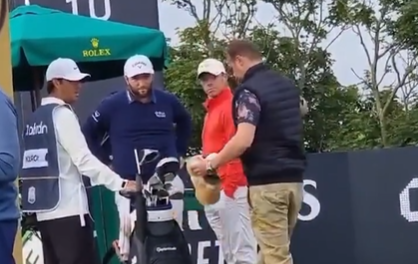 Rory McIlroy could not believe his eyes on the 10th tee box at the Scottish Open this morning as a golf punter strolled over to McIlroy's bag and took out his golf club before playing with it right in front of him!

McIlroy was standing on the 10th tee next to his caddie and best mate Harry Diamond ready to start his second round at The Renaissance Club alongside playing partners Jon Rahm and Justin Thomas.

But as they waited for the starter to let them go, a golf fan just strolled past the ropes, took off McIlroy's driver headcover and then pulled out one of his irons before walking over the other side of the tee box to take a few practice swings.

It really is one of the most bizarre videos you will ever seen on Tour.

WATCH THE FULL VIDEO BELOW

Check out what a number of golf fans were saying following the incident:

"Imagine what would have happened if Rory had Stevie Williams on the bag!"

"Why are they all just standing there without doing anything?!"

"This is why Rory needs a better caddie."

"He has some stones that fella."

"Dude could have just kept walking with the headcover."

"McIlroy should have just taken him out with another club."

"I think they need to check him for laser pointers."

"This is absolute madness. Never seen anything like this before!"

"Erm, where is the security for three of the biggest names in golf?!"