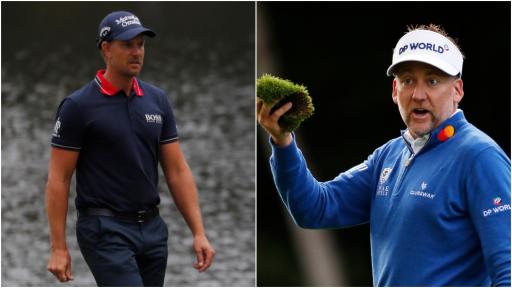 Henrik Stenson left golf fans in hysterics this afternoon after posting a video of him stealing Ian Poulter's car keys at the DP World Tour Championship - and he filmed the entire incident as it happened!

Poulter and Stenson are good pals and they've been known to prank each other quite a lot in recent times. Only this one was the very best yet! Watch what happened in the video below:

"Looking for the car keys down by the car, but they're never going to find them because it's in my pocket," said Stenson.

Stenson then sends Poulter a selfie of him with the car keys in his mouth, as he waits for the Englishman to see the picture while looking from a window above the car park.

When Poulter sees the photo, he turns round to see Stenson peering through the window. Cue Poulter expletives, and lots of laughs from those in Stenson's camp.

It was not the best of weeks for Stenson and Poulter, with the Swede finishing 2-under par for the week in tied 36th and the Englishman a further stroke back on 1-under par.

Matt Fitzpatrick won the DP World Tour Championship on 15-under par, one stroke ahead of Lee Westwood, who won his third Race to Dubai title and became the oldest to do it in the process at the age of 47 years old.

Poulter finished 31st in the Race to Dubai standings, with Stenson way down the list in 147th.