OUCH! Francesco Laporta HITS HIS COACH ON THE HEAD at the BMW PGA!

Laporta's coach left with a bandage on his head after being clattered by his man. 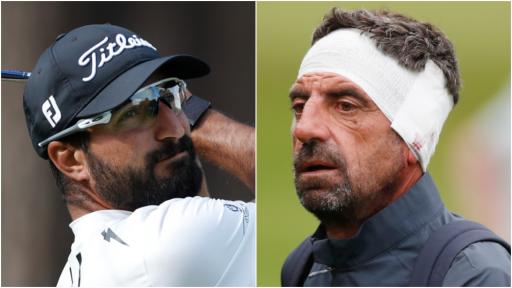 If Francesco Laporta's golf coach did not already have a headache on the front nine at Wentworth on Sunday, it's fair to say he most definitely did when his man struck his drive down the par-4 13th.

Laporta was in pole position to land his maiden European Tour title as he took a one-shot lead into the final round in Surrey.

But he was quickly lapped by the chasing pack after going out in level-par on a final day of low scoring.

He kept himself in with a slim chance of victory with a birdie at the par-5 12th but had fallen four shots of the pace.

Then he boarded the unlucky 13th. At least that was the case for his swing coach Pietro Consenza.

Laporta fired his drive well right off the tee and it plonked Consenza straight on the head.

He was quickly attended to by on-site medics and he was bandaged up as blood poured from underneath the wrapping.

Laporta birdied the par-3 14th but handed it back with a bogey at the 15th to end any hopes he had of winning the tournament.

He would birdie the final hole to card a round of 70 to finish tied sixth on 16-under par.

Billy Horschel won the tournament by one shot on 19-under par following a superb up-and-down birdie from inside 100 yards at the 18th.

Despite failing in his bid to win a maiden European Tour, Laporta has at least moved into the World's Top 200 following a fourth place in his home Italian Open and a tied sixth at Wentworth on Sunday.

Laporta has won twice previously on the Challenge Tour.