MacIntyre moves into a share of the lead on day two at The Belfry... 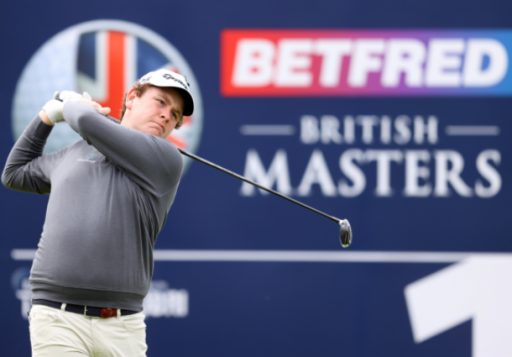 Robert MacIntyre carded the joint-lowest round of the day, a 6-under par 66, as he took a share of the lead at the halfway stage of the Betfred British Masters hosted by Danny Willett.

The Scotsman, searching for his second European Tour victory, raced up the leaderboard with five birdies on his first five holes on the iconic Brabazon Course at The Belfry, making the turn in 4-under par.

Three birdies on his closing five holes saw him sign for a 7-under par total, sharing the lead with compatriot Calum Hill and England’s Richard Bland.

The first time in 10 years we've had two Scotsmen in a share for the lead after 36 holes #BetfredBritishMasters pic.twitter.com/EsNuFcFD2d

"It was one of those days where you start off and everything you look at goes in," said MacIntyre, who is bidding to win his second European Tour title following his maiden triumph in Cyprus in November 2020.

"It was exactly where we’re aiming it and it was good to see the work we’ve been putting in on the putting continuing to perform.

"I started working with Graeme (Leslie) in the middle of last year. I was getting into bad habits and he was just drilling it into me: ‘trust in what you’re doing’. Everything we’ve done is pretty simple; he just gives me basic things to work on and then I just trust it."

Friday marked the first time Bland has shared the lead after 36 holes at a European Tour event since the British Masters in 2016, as he bids to record a maiden win on his 478th start.

The 48-year-old Englishman is the only bogey-free player after two rounds, adding to yesterday’s score of 68 with a round of 69.

Hill continued the form which has seen him record three top-eight finishes on the 2021 Race to Dubai, which included a season-best result of tied third at the Kenya Savannah Classic supported by Absa in March.

Pepperell's post-round interview was also particularly relatable to many an amateur golfer:

Tournament host Danny Willett remains in the hunt after a level par round of 72. The 2016 Masters champion shares 16th place on three under par. Willett has raised £9,000 for his chosen charity, Prostate Cancer UK, after carding four second round birdies, adding to the five he recorded yesterday. Tournament title sponsors Betfred have pledged £1,000 for every birdie and £2,000 for every eagle Willett records this week to Prostate Cancer UK.