Some of the country's leading greenkeepers reveal the things they love most about their job on the golf course... 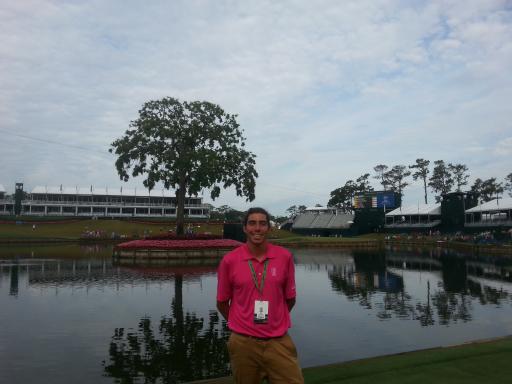 But what if you actually worked out there? Swap the desk for a fairway or the work van for a state-of-the-art piece of equipment on the final day of The Open.

BIGGA spoke to five greenkeepers about why they think greenkeeping is the best job in the world. Their answers were surprising, interesting and we’ve got to be honest, we’re a little bit jealous.

Bill Whybrow left school aged 16 with few ideas about what he wanted to do next. Although he wasn’t the most gifted student, he hoped to gain a career in sport. A talented golfer, he started helping out at his golf course, Garon Park in Essex, and embarked upon a career that has now seen him work at golf courses all over the world.

"While I was at college I began volunteering at Garon Park," said Bill, 25. "And by the time I finished college I knew I wanted to be a greenkeeper, rather than work in a leisure centre. I was offered a seasonal position at first but then was taken on full-time. I loved every aspect of the job, from being out in nature to helping renovate the course and making it better to play.

"Garon Park was local to me so it was safe, but I wanted to spread my wings and so I got in contact with a course superintendent called Steve Chappell, who had been the head greenkeeper for the 2014 Ryder Cup at Gleneagles. He now works at Royal Bled Golf Club in Slovenia and I knew he was on the look-out for seasonal greenkeepers.

"I met Steve at BTME, which is the annual meet-up and education event for the UK’s greenkeepers, hosted by BIGGA. We had an informal chat and after an hour he told me I had a position in Slovenia if I wanted it!

"I spent the summer in Slovenia and since then have been a seasonal greenkeeper in the Netherlands and Australia and I’m currently a greenkeeper at Lucerne GC in Switzerland. Since March 2018 I’ve been a globe-trotting greenkeeper, experiencing different cultures and seeing parts of the world I never imagined I would – while getting paid to do it! The best part is I get to take my clubs around the world and play on the surfaces I have prepared.

"One day in the future I hope to have my own course to manage. I love my job and wouldn’t change it for the world."

#2 - You get to use new technology

For greenkeepers like James, over the centuries the goal has stayed the same – to provide top class playing surfaces for golfers – but the technology and techniques available to them has improved drastically.

"I am honestly not even that old, but at the start of my career technology went as far as a kettle in the canteen, there was nothing at all!" said James, 40. "We are now spoiled for choice and I can theoretically manage our golf courses from anywhere in the world.

"Although the availability of technology changes from golf course to golf course and budgets will impact what you have access to, my day as a golf course manager involves a huge amount of technology, which makes it a really interesting job.

"I might start by checking moisture levels with a GPS moisture meter, which sends a map of the green to my smartphone via Bluetooth and highlights where all the wet and dry areas are, so watering can be targeted. The same smartphone can then control our irrigation system and we can fine tune where we want water to be sprayed, allowing us to be incredibly precise.

"Modern golf course machinery is progressing at a speed of knots and autonomous mowers will soon be extremely common. They’ll need greenkeepers to control them and make sure they’re working correctly. More and more electric machines are being introduced to the industry and it could only be a matter of time before you can change the height on a machine at the touch of a button.

"Technology in turf has many forms and it’s a really exciting time to be in the profession!"

Stefan Carter at Augusta National, home of The Masters

#3 - You get front row seats to the biggest sporting events

The one thing that unites every major sporting event that’s played on turf is that the ground has been prepared by a talented team of groundsmen and greenkeepers. Although they work at some of the world’s most famous sporting venues, you’ll find these are ordinary guys who through hard work and a little bit of luck have earned jobs maintaining the hallowed turf at countless venues.

But to host a major event, such as The Open, golf courses also enlist the support of volunteers from all over the world, who give up their free time to help prepare the venue and gain some incredible experience, while getting behind the scenes access to major sporting occasions that money can’t buy.

"I originally started my career at Forest Hill in Leicester and never imagined that just a few weeks later I would have almost completed the ‘grand slam’ of golf tournaments – for a greenkeeper, that is," said Stefan, 28.

"My first taste of tournament greenkeeping was at the 2013 Open at Muirfield. To be walking up the 18th green on the Sunday evening with thousands of spectators cheering on their favourite golfers was a truly breath-taking experience.

"I loved it and one of the most amazing things about greenkeeping is that head greenkeepers are always incredible accessible, so you can ask them for career advice and support and they’ll help you out. If you have a conversation with them, they’ll remember you and it means when they’re on the lookout for volunteers for major events, you can often get involved – which helps your career and opens up even more doors!

"A personal career highlight was being part of The Masters at Augusta National in 2018. A year’s internship had given me a first-hand insight into why Augusta National is undoubtedly the best of the best and to see all the hard work come together was simply unforgettable.

"Other highlights inside the ropes include seeing the legendary 17th green up close at TPC Sawgrass and the military-like operation of switching all the plants on the hole, including on the island, to pink flowers for Mothering Sunday after play on Saturday in what is known as ‘The Pink Out’.

"Being part of the 200-strong team for the 2018 Ryder Cup at Le Golf National also brings back incredible memories. I remember standing by the first tee when a thunder clap erupted from the grandstand as the Europeans readied themselves for battle.

"Of course, each year we get to prepare the course at Wentworth for a number of events, including the BMW PGA Championship. It’s amazing to think how far I’ve come from my time at Forest Hills and I can’t wait to see what the future has in store."

#4 - You get to work surrounded by nature

There’s a clear understanding within the golf industry that the sport has a massive role to play in supporting the biodiversity of the UK, which is increasingly under threat. Golf courses take up around 2% of the entire landmass of the British Isles and that means greenkeepers can play a huge role in conversation efforts.

Golf courses are essentially one big wildlife reserve, with a variety of habitats making them incredibly attractive to all different kinds of nature – from wildflowers to rare animal species.

Spending time in nature has been proven to improve health and wellbeing and rather than being stuck inside an office, greenkeepers are out there experiencing that environment first hand and helping to develop and promote it wherever possible.

James Hutchinson, 47, is a former greenkeeper and now works with BIGGA as an ecology specialist.

James showing Sherborne members the wildlife on offer at the course

"All courses I visit have some kind of water feature, woodland, tall dune or simply an area where golfers do not go and this is a pleasant place to take five minutes to unwind," said James.

"It may be surprising to hear, but most of a golf course is actually out-of-play or rough areas. Even things like bunkers can provide valuable habitat for sand martins or mining bees.

"One of the reasons that golf has been so popular since the UK lockdown was lifted is that it gives golfers the chance to spend quality time out in nature, which is something we’re losing in our increasingly-urbanised society.

"There really can’t be many professions like ours where you get to spend your days out in nature and even in winter, when the weather turns colder, there’s still a lot going on at your average golf course. The butterflies and bees may be overwintering in a log pile you created, but there are plenty of other animals, such as hare and deer, to watch given the trees are bare and grasslands have died back.

"I’m so glad that I spent 25 years as a greenkeeper and that I get to continue visiting these havens for wildlife on a regular basis."

OK so we’ve heard about some of the brilliant things about greenkeeping that you may not have been aware of, but the best benefit is potentially something that we all consider when looking at what career to go into.

In our modern world of dead-end jobs, the clear career progression structure that greenkeeping offers, with top course managers earning up to £100,000 a year, makes it an attractive option for the ambitious and career-driven.

Lucy Sellick, 45, became Wales’ first female course manager when she was appointed to the top job at Wenvoe Castle Golf Club. She’s been a greenkeeper for 30 years and worked her way up from apprentice to a management position through the clear career structure that’s in place within the greenkeeping profession.

"I am often asked how I got into greenkeeping and people are surprised to hear that it was by accident and that I was motivated by money!" said Lucy.

"When I was 16 a neighbour was building a golf course and I helped out. Then when the course was completed I asked if they would take me on as an apprentice and they did!

"Eight years later and a greenkeeping qualification under my belt, I got a role position at Celtic Manor. Going from a small team to over 50 during tournaments certainly took me out of my comfort zone! I got to experience and do things you can’t imagine, all with high standards and presentation that I still maintain today.

"After eight European Tour events and the construction of a Ryder Cup course, I became deputy course manager at Saltford Golf Club. The club invested in our professional development and that helped us improve the quality of the course. At this point I also became part of a BIGGA committee and the learning opportunities offered by the association really helped me.

"Finally, all that knowledge and experience came together and I smashed the glass ceiling by being appointed course manager at Wenvoe Castle. It’s everything I expected it to be, with highs and lows and the team doing the best they can with the resources we have. Membership is increasing and the standards are getting higher, but importantly we’ve also got a happy, confident team.

"Just because I reached where I wanted to be in my career doesn’t mean that things stopped. Next up I may try to become a Master Greenkeeper, while I also fancy working overseas. I could never have guessed that I would become a BIGGA Regional Chairperson and be the first female member of the association to sit around the board table. It’s incredible where greenkeeping can take you!"

For more information about becoming a greenkeeper, visit www.bigga.co.uk or email info@bigga.co.uk