Golf, pool, drinks and social - Kings Golf Studio in East Grinstead offers something for all. 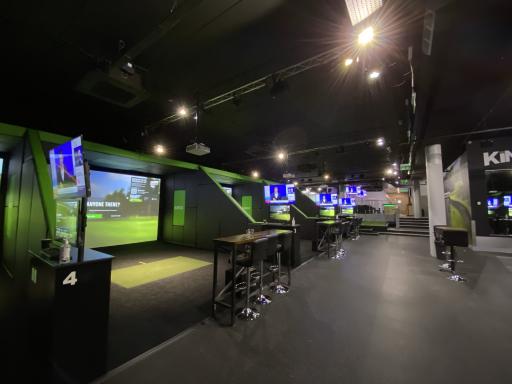 When it comes to golfers' paradise, the sweet smell of Azaleas as you drive up Magnolia Lane to Augusta springs to mind, or perhaps it's that fresh sea breeze whipping in off St Andrews Bay as the Swilcan Bridge appears beneath the fog on the Old Course.

How about a musty carpet scent wafting under your nose from the local Wetherspoons as you climb the staircase to Kings Golf Studio in East Grinstead?

But just wait until you walk in.

Opened for business in May this year and located just off the High Street in The Atrium, co-founders Joe Favata and European Tour pro Gary King set out with a vision to create the UK’s largest indoor golf centre.

Kings has certainly delivered on that, and in spades.

After hearing about the early hype, GolfMagic was keen to head over to West Sussex and see Kings Golf Studio in all its glory.

Let's just say it was more than worth the journey.

From the moment you reach Kings Golf Studio, you are immediately presented with a monolithic print of a pristine driving range dwarfing the front doors and covering the surrounding walls.

The mountain backdrop and clear blue skies suggests you are about to enter somewhere special.

As you step into the venue, you then notice little orange boxes scattered across the turf-like flooring that every serious golfer will instantly recognise.

The orange box that is synonymous with PGA Tour golfers on the range each week, powers nine golf simulator bays, allowing you to play some of the world’s very best golf courses, whilst spitting out continuous streams of data.

In fact, Trackman is only just the beginning.

Perched just above the main floor (where seven of the bays are located) in its own amphitheatre, lies the artificial ‘Puttview’ green where a light projection beams the exact break of any putt to hone your green reading skills.

We could have spent the entire day just on here, it was incredible.

Some would say it’s cheating, others would argue it’s the ideal practice environment providing real time feedback on start line, break and pace.

Throw in a session with one of the resident professionals who will fit your putter with Capto, which uses a high accuracy sensor to deliver immediate feedback on the iPad, and you have the complete package to optimise your putting stroke.

Okay, now if you want the really juicy stuff, you will want to get stuck into some Full 3D Swing Capture.

Situated in its own little cave off the main floor, entry is restricted, and access can only be granted with the swipe of a special key card.

Golf’s version of MI6, this secret laboratory is the Studio’s piece de resistance.

Looking over both shoulders to make sure it was all clear to enter, GolfMagic stepped foot inside.

I'm fairly certain I heard someone say they had been expecting us.

If you class yourself as bit of a golf geek, or simply want to become one, then this is the room for you.

In the private golf simulator bay, the orange Trackman box joins forces with Swing Catalyst force plates to measure a players’ weight distribution and ground pressure during the swing.

In addition, the bay is the only publicly-accessible facility in the UK installed with GEARS technology - a full body 3D motion capture system allowing for an entirely new dimension of golf analytics.

You can even compare your golf swing to the likes of Dustin Johnson, Rory McIlroy and other PGA Tour players, frame by frame. We thought this was really cool.

Powered by eight 1.7 megapixel cameras running at 240 frames per second, GEARS places Kings Golf Studio as the ultimate playground for serious golfers and coaches alike; who by the way, are encouraged to use the facility with their own students which is a refreshing approach to collaborative golf tuition.

Whilst we all love a bit of tech, some people don’t want to know how slow their golf swing is, how off balance they are in the backswing, and how unflattering their 3D body projection looks on a computer screen, but this is where Kings has gone beyond purely a golf centre.

Instead of using the putting green for practice, there is the option to set the projector to ‘Puttpong’ (more commonly known as Beerpong on a traditional table tennis table) or jump on the Shuffleboards and American pool tables, bringing a whole new competitive edge to the venue that doesn’t have to involve golf.

Then comes the VIP room nestled away in the far corner of the studio which allows up to 12 guests to enjoy a private golf bay, an 85 inch TV, a huge corner sofa, waitered service and a pool table, with the option to control music and lighting to personal taste.

The social scene at Kings is all supported by a fully stocked premium bar including fine wines and cocktails, and seating in the main floor area for up to 120 people.

Whilst seated, it is physically impossible to face in any direction without having the option to look at 1 of 21 screens on a continuous loop of live sports.

The sport on the TVs may be off for certain events such as the bottomless brunches, quiz nights and late night DJ sets when the floor transforms from funky golf swings to even funkier dance moves.

All of this plus weekly kids clubs, a cinema/meeting room and the opportunity to develop corporate partnerships with local businesses, shows that Kings Golf Studio is very much opening its doors to everyone.

And we are all for a bit of that here at GolfMagic.

After launching only a few months ago, this is just the beginning of the journey for Joe, Gary and their team.

Whilst becoming a social hub for the local community, golfers are travelling far and wide to sharpen their skills at the Studio.

As the dark nights draw in and with winter looming, it begs the question... does anyone fancy a knock at Pebble Beach?

PRICES PER HOUR PER BAY