Adam Scott claimed a two-shot victory at the Genesis Invitational on Sunday, his 14th victory on the PGA Tour. 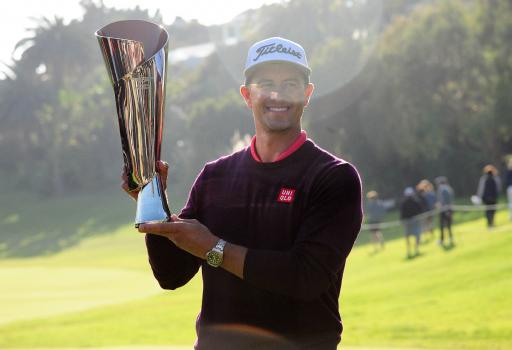 Adam Scott claimed his 14th PGA Tour victory at the Genesis Invitational on Sunday, beating three players by two shots, while Rory McIlroy struggled to find his form in his final round.

The Australian shot a one-under par score of 70 on the final day at Riviera Country Club to pick up his first win since claiming the WGC Mexico back in 2016.

McIlroy, who started the final round as joint leader with Scott and Kuchar, failed to find any momentum throughout his up-and-down round, shooting a 73 on Sunday to finish T5 with Hideki Matsuyama.

All three players in the final group birdied the par-5 first, but Scott took the lead after he sank a 25ft putt at the third for another birdie.

Scott's lead slipped when he bogeyed the fourth hole and followed that up with a double bogey at the fifth, but bounced back with another successful putt for birdie at the par-three sixth.

McIlroy failed to capitalise on Scott's early mistake, making a double bogey of his own at the fifth and another dropped shot at the sixth.

At the turn, Scott was in a three-way tie for the lead with Kuchar and Harold Varner III, but Varner dropped out the race with a double bogey at the 10th after he topped his 3-wood off the tee.

The most sought after footage since the Zapruder film apparently. Here's the elusive Harold Varner topped 3 wood. No toptracer included. @NoLayingUp @BrendanPorath pic.twitter.com/cJF782CcZi

Scott moved two shots clear at 13 and after dropping a shot at the 15th, the 39-year-old restored his advantage with a birdie at 17 and safely two-putted for par at the last to secure victory.

Dustin Johnson and Jon Rahm both shot one over par to finish in T10 and T17 respectively, while tournament host Tiger Woods finished last out of the 68 players who made the cut, shooting a final round of 77.

It was a difficult day for Woods, but he received one of the loudest cheers of the week after he holed a bunker shot at the second time of asking.

These two shots from @TigerWoods?

Golf in a nutshell. He can't help but smile.#QuickHits pic.twitter.com/mDpFIzYhmB