Defending club champion has ace day on the course. 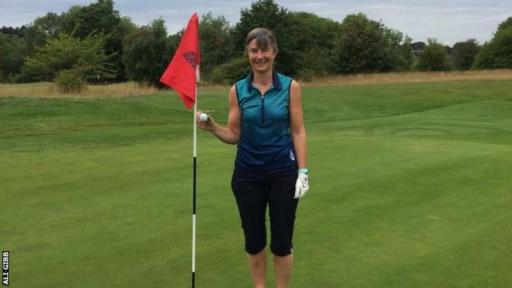 An amateur golfer, 51, hit three holes-in-one on the same day as she defended her club championship.

Ali Gibb scored two aces on the same hole – the fifth – and another on the seventh in her second round at Croham Hurst Golf Club in South Croydon, Surrey.

"Today was just a weird day. It was just very, very strange," she told BBC Sport. "On my card I had a nine, two eights, sixes, fives, fours, threes, twos and three ones.

The defending champ of the 36-hole event was certainly surprised, but it wasn’t her first hole-in-one.

"I have had a hole-in-one before - three actually. One was here on the seventh, one at Surrey National Golf Club, and one at the Atlantic Beach Golf Estate in South Africa," Gibb added.

"It's just absolutely extraordinary. I think I will wake up tomorrow asking if I've just been dreaming about it and if it is club championship day today instead!"

Club secretary Jean Cooke said: "It was fantastic, a great occasion. It's the biggest golf day of our year, and as news travelled around the course, the buzz was spreading.

"At the award ceremony in the evening, the club bought her three bottles of champagne, and there was a really good celebration.

"Scoring one hole-in-one in a whole lifetime is unusual but three in one day is extremely rare if not unique."

Previous
WATCH: How to hit the golf ball longer and straighter than ever before
Next
Fowler sidelined by torn oblique