Brooks Koepka becomes the first player since Tiger Woods to successfully defend the PGA Player of the Year honours. 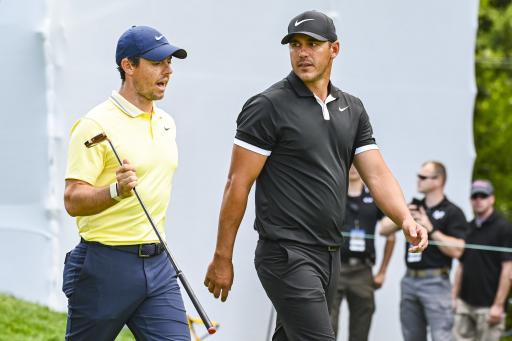 Brooks Koepka has been awarded PGA of America's Player of the Year, despite Rory McIlroy being crowned FedEx Cup champion following his third title of the PGA Tour season.

The World No.1 becomes the first player since Tiger Woods in 2007 to successfully defend the PGA Player of the Year accolade.

Koepka, 29, won the CJ Cup in the wraparound season in October 2018 and then went on to successfully defend the US PGA Championship in May before winning the WGC-FedEx St Jude Invitational for his third title of the PGA Tour season in July.

McIlroy, 30, also won three times with wins at The Players Championship in March, Canadian Open in June and Tour Championship on Sunday.

13-year-old golfer shoots amazing score of 58 at an Oregon state tournament
Did you know this rule about STANDING out of bounds with your ball in play?

RELATED: MCILROY CLAIMS "I WANT TO BE MORE LIKE KOEPKA"

The PGA uses a year-long points formula to determine its winner, with tournament victories, official money standings, and scoring averages featured in its equation.

That category proved to be the difference maker, with Koepka finishing with 84 points to McIlroy's 78.

Patrick Cantlay and Gary Woodland tied for a distant third with 42 points, with Matt Kuchar coming in fifth with 36.

The PGA Tour is expected to announce its Player of the Year, which is voted on by the players, within the next month.

The decision will be interesting with both players having won three times during the season, but with the likely scenario that players will regard the major performances in higher regard.

McIlroy, on the other hand, finished tied 21st at The Masters, tied eighth at the US PGA, tied ninth at the US Open and a missed cut at The Open.

Since the the award's introduction in 1990, only twice have the PGA of America and PGA Tour winners been different: Nick Faldo (PGA) and Wayne Levi (Tour) in 1990, and Corey Pavin (PGA) and Fred Couples (Tour) in 1991.

Koepka becomes the first player to defend the PGA Player of the Year since Tiger Woods in 2007.

Golf news
Did you know this rule about STANDING out of bounds with your ball in play?
Golf news
Beef Johnston FIRES SHOTS at Piers Morgan over Ben Stokes England withdrawal
Equipment news
Sik Golf Putter Fitting - Why should you get fitted for your putter?
Features
"English golf may be booming but course CLOSURES are happening all around us"
Golf news
WATCH: Schauffele, Thomas, Morikawa and Reed star in The Hangover